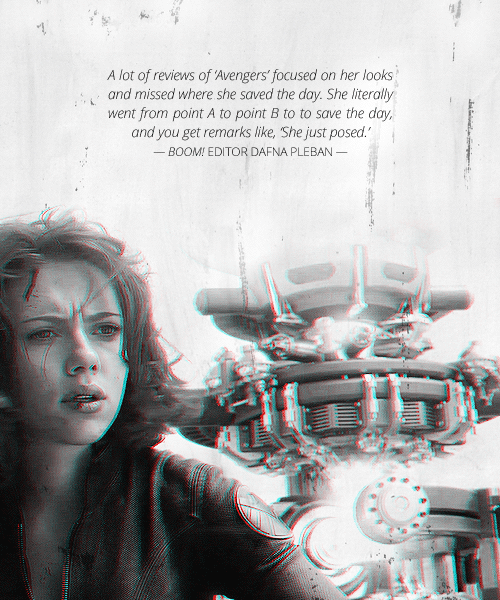 As for the lesser luminaries… (my inner twelve year old) had high hopes for Black Widow. But his youthful hormones, poised to rage at the mere sight of Scarlett Johansson in martial arts gear, remained disappointingly unstirred. In the token sexy female department, Scarlett was a pale pink at best. — Rick Groen, Avengers review, Globe and Mail (x)

Pleban offered up her feminine ideal as well: Black Widow. She stated that society’s inherent notion of gender roles could easily be read into reviews of “Marvel’s the Avengers,” where Black Widow’s important role in the film was often marginalized or side-lined in critiques.

“A lot of reviews of ‘Avengers’ focused on her looks and missed where she saved the day,” said Pleban. “She literally went from point A to point B to point C [to save the day], and you get remarks like, ‘She just posed.’”

This is a good question anon, but big.

I mean, comics are pretty big. There’s that. Different portrayals of Natasha, shaken and stirred with fifty years and dozens of writers, haven’t always agreed with themselves. Dialogue trends come and go. You can even see this problem spreading out at the edges of the MCU. I find the Iron Man 2 prequel comic and the Black Widow Strikes mini two pretty different (I might say “conflicting”) portrayals of Natasha’s inner monologue.

I talked about some of the thematic resonance between Natasha’s comics and the Avengers film here. But there’s a lot we still don’t know about Natasha in the movies. Stuff we may never know or stuff we might find out later. (Either way, tumblr, I’m gonna complain about it!) By rule of adaptation, things always change. One of the big differences between the two versions, plotwise, is that in comics Natasha defected to the Avengers. She only joined up with SHIELD later to prove her own loyalty. Pretty soon, she ditched both groups, to better fight her own causes.

That, I would say, is the biggest absolute difference. In the comics, Natasha’s an experienced superhero. She’s led the Avengers. She knows who she is there, and how to be good, to be heroic to others and kind enough to herself. In the films, Natasha is just starting to learn.

There are other dimensions of difference, of course, chief among them hairstyling and the Clint Barton Dimension. But overall I think the films are faithful to the source. Smart, sharp, and well-hewn, compassionate enough to be tragic, twisted enough to overcome, warm in dark places, cold in the sunlight, sometimes introduced unnecessarily in her underwear. Natasha is as she is.

Natasha: Somebody needs to teach you some manners. Here’s the only lesson you’ll ever need.
Clint: Yow!! Where’d that come from, Natasha?
Natasha: Just a little gadget tech directorate was tinkering for me— hu— that doesn’t sound good. looks like some kinks need to be worked out of my “Widow’s Sting” before it’s field ready.

One of my big regrets about the films (don’t worry, I don’t have many) is that Natasha doesn’t use really use her gauntlets. I think they’re cool, and comic-booky, and I think superhero flicks should be cool and comic-booky.

But I also think they’d make a fun toy for kids to play superhero with. And we don’t make many of those for girls who want to be superheroes.

From Avengers Initiative #1, by Fred Van Lente and Ron Lim.