It depends on your definition, I guess.  Natasha and Bobbi have interacted several times, usually positively, but most of their interactions run through Clint, and not avengeriffic superspy action.

They met in Avengers #239, and immediately hit it off, but that issue was the “reserve Avengers meet David Letterman” special and not the Natasha plus Bobbi special. 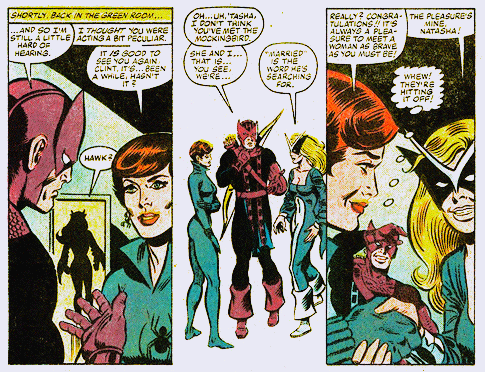 Clint: Oh… uh, ‘Tasha, I don’t think you’ve met the Mockingbird. She and I… that is… you see, we’re…
Bobbi: “Married” is the word he’s searching for.
Natasha: Really? Congratulations! It’s always a pleasure to meet a woman as brave as you must be!
Bobbi: The pleasure’s mine, Natasha!
Clint: Whew! They’re hitting it off!

Solo Avengers #14-16 is a Hawkeye/Black Widow team-up, but when Bobbi finds out Clint rushed off sudden to rescue Natasha, she gets suspicious and kinda sorta stalks them.

The closest thing to a Bobbi/Natasha teamup, though, is probably Widowmaker, which is a four issue miniseries crossover between Hawkeye & Mockingbird and Black Widow.  The group eventually splits up and so Natasha and Bobbi share as much panelspace as they could, but there are still a few scenes of them interacting. 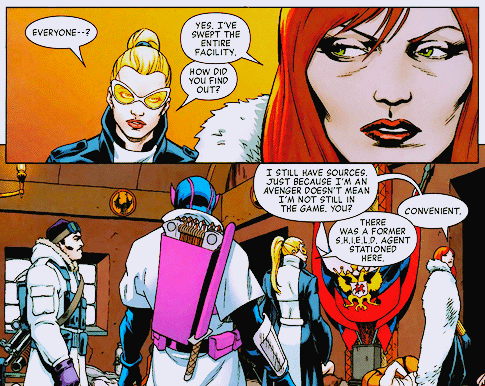 Bobbi: Everyone— ?
Natasha: Yes. I’ve swept the entire facility.
Bobbi: How did you find out?
Natasha: I still have sources. Just because I’m an Avenger doesn’t mean I’m not still in the game. You?
Bobbi: There was a former SHIELD agent stationed here.

Natasha and Bobbi also appear every so often in the current Hawkeye ongoing, and while they’ve each had some significant scenes on their own, when Bobbi and Natasha are on panel together it’s usually to form the Clint Barton bad life choices ex-girlfriend chorus.

Bobbi and Natasha were also on a team during the second volume of Secret Avengers. I almost forgot about this, insert mindwipe joke here.

However obvious this team-up might seem in concept: two SHIELD agent superheroes, there isn’t a whole lot of substance to their interactions. Bobbi’s high times were in the West Coast Avengers era, when Natasha had almost disappeared from the Avengers books altogether. Most of Natasha’s significant appearances came in Daredevil. When Natasha started appearing in Avengers books regularly, Bobbi was killed off the way women often are. Even with her semi-recent resurrection Bobbi and Natasha have usually found themselves in different books on different teams. Since the cancellation of Hawkeye & Mockingbird, Marvel has struggled to stick to a direction for Bobbi Morse. Which is strange, because she’s a character with enough directions to fill a map. Lesson: sometimes comics make it hard to go easy places.

Panels from Avengers #239 and Widowmaker #1.