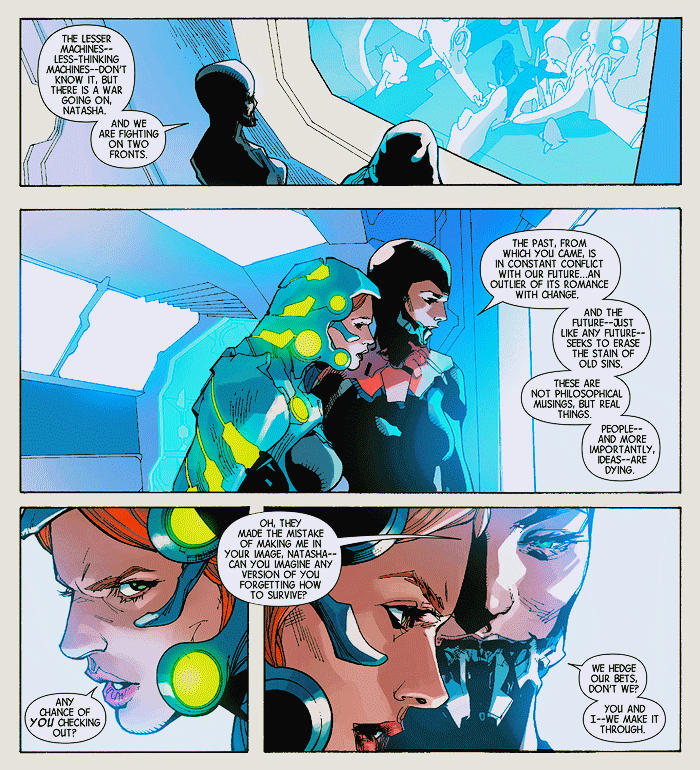 Future!Natasha: The lesser-machines— less-thinking— don’t know it, but there is a war going on, Natasha. And we are fighting it on two fronts. The past, from which you came, is in constant conflict with our future… an outlier of its romance with change. And the future— just like any future— seeks to erase the stain of old sins. THese are not philosophical musings, but real things. People— and more importantly, ideas— are dying.
Natasha: Any chance of you checking out?
Future!Natasha: Oh, they made me in your image, Natasha— can you imagine any version of you forgetting how to survive? We hedge our bets, don’t we? You and I— we make it through.

This encounter with the bad robot Natasha of the far future stabs at the core of Black Widow’s character. She is, to the end— to this end— a survivor, a mercenary, willing to deal with the enemy and turn sides to ensure her existance. The future Natasha, like the Natasha of the past, yearns for freedom. But the freedom to do what? She has no agenda we see but continuing. Hickman’s dark mirror for Natasha, then, isn’t evil but amorality. It isn’t Natasha’s whites turned to black, but her shades of grey that are switched.

This scene forshadows a lot directly, from the encounter with future Franklin next issue to Tony Stark’s imprisonment in New Avengers #26. But I thinkt he most interesting thing it sets up is that, when the world is ending, when time runs out, our Natasha doesn’t make bargains to survive. She decides to go down with the ship.

From Avengers #31, by Jonathan Hickman and Lenil Yu.