Natasha: We… had to know what Stalyenko was doing, Yelena. We had to stop him.
Yelena: There were other ways!
Natasha: Yes, there were, but… I wanted you to understand, finally, what it meant to be a spy. We are not like Daredevil or the others, Yelena, we are not heroes. We are tools. And tools get used.

I think this is maybe what Whedon was talking about when he said: “She’s not a hero, you know, and it’s something that I read and I feel bad that I can’t remember who wrote the book, but it’s in one of the books explaining ‘These guys are heroes, you are a spy. It’s a different thing, it’s a different skill set, and you don’t have their moral high ground or any of that good stuff’ and that just makes her so interesting to me.” Or, I hope so, anyway, because if he’s basing Avengers 2 script on the Grayson/Rucka stuff, he’s doing it right.

I’ve written about the spy vs superhero thing before, but it drills down to this. Natasha became a superhero to escape her old spy life, but she can never get all the way out. The skills that the Red Room taught her are what let her be an Avenger. And as long as that’s so, the line between who she is and who she was will always be murky, grey.

After all, she still wears her old codename.

Fury: And Yelena goes back to Moscow. Back to the Red Room. Maybe now she knows it’s not a game. Maybe she’s grown up.
Answering Machine: Yelena, it’s your mother. Where have you been? We’ve been worried about you… why haven’t you called your Aunt Olga? She says Dmitri is dying to meet a girl like you… he says you sould like the woman he’s been looking for.

This is one of the most interesting pages about Yelena— the voiceover of Fury’s expectations and the reality Yelena returned to, all dialogue disembodied, Yelena herself silent. Natasha spends most of this storyline embodying Yelena, a person she has never been but thinks she understands. To Natasha, Yelena is a reckless adventurer, and escapist, and someone who brings too much passion, too much excitability to the game of espionage. But I don’t know if she considers why Yelena is all these things. It’s too foreign for her to consider.

Natasha was thrown out of a burning building as an infant and her whole life has been on fire since then. But Yelena has a family, a mother, an Aunt Olga trying to set her up with a boy named Dmitri. A season of cloudy skies. An ordinary, boring life to escape.

She wanted to be a spy, to be the best of them. 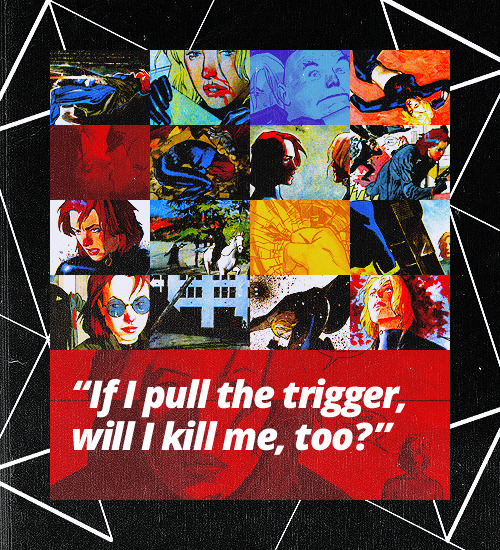 Fury: Give it up, Black Widow!
Yelena: No!

Black Widow: Whatever it is, I’m sure SHIELD wouldn’t approve. Which is why I’ve taken care of that problem for you. Fury and his dogs are so busy chasing their rogue agent Romanov they don’t even know you’re here.
Stelyenko: Interesting. And you orchestrated this by yourself? Framing Romanov for your murder?
Black Widow: Why are you surprised? I’d hardly be worthy of the name Black Widow if I couldn’t do such a thing, General.

A look inside the premiere hardcover I’m giving away for that contest I am shamelessly plugging.

Lately, I’ve been thinking about Breakdown.

It’s not my favorite Black Widow story. Tightly plotted and densely characterized, yes, but hampered by the conflation of bleak tone and bizarre premise. But I’ve been thinking about it.

We want our characters to be strong. Not just the women— but especially the women. We want them to be tough and unflinching, to laugh in the face of danger, to never give up, never surrender. We want that, and that’s a good thing, but it isn’t always the relatable thing. It isn’t always the best thing, and it isn’t ever the only thing.

Breakdown, written by Devin Grayson and Greg Rucka and painted by Scott Hamption, is a story about an evil man and his nuclear weapons and the women who need to stop them. Except it isn’t, not at all. It’s about Natasha and Yelena and the struggle to find identity in a world of codenames and masks. It’s about ends and means and the lengths we will go to save someone. Mostly though, it is about Natasha replacing herself with Yelena and vice versa, in order to prove a point.

It is very difficult to relate to Natasha. And that’s important.

She is, however, extremely kick ass. This is a story in which Natasha holds all the cards. She is not just the agent in the field; she’s the mastermind behind the curtain. Using Yelena’s face, she demands her way into Stalyenko’s shady armsdealing.

Natasha: Whatever it is, I’m sure SHIELD wouldn’t approve. Which is why I’ve taken care of that little problem for you. Fury and his dogs are so busy chasing their rogue agent Romanov they don’t even know you’re here.
Stalyenko: Interesting, And you orchestrated this yourself? Framing Romanov for your murder?
Natasha: Why are you surprised? I’d hardly be worthy of the name Black Widow if I couldn’t do such a thing, general.

It’s Natasha’s unthinking to-the-bone confidence that lets Stalyenko figure out that this isn’t Yelena. But by then, it doesn’t matter.

N.B. that when Stalyenko asks who she is, she doesn’t give him her name. It’s not that Natasha doesn’t care that she’s Natasha, Natalia Alianovna Romanova, on the contrary, she cares about that very much. But Stalyenko doesn’t, and she knows that. Compare with the scene previous, which went something like this:

Man: Impostor! You are not the real Black Widow—
Natasha: Actually… I am.

But what about the real Yelena Belova? She has woken up in a strange bedroom, with a strange face and strange people waiting for her. She tries to rationalize? Is this a deep cover mission? Spies have to fade into other people, that’s what they’re made for. But then she finds a bag in a bus station, with a mission and with a uniform. Target: Yelena Belova. To succeed, she’ll have to kill herself.

It’s a set-up, of course, Natasha’s covered herself in kevlar and bloodpacks, and she makes for a convincing corpse. And Yelena believes, she believes when the cops try to arrest her for the killing she’s committed in broad daylight. “Not murder,” she says, “suicide.” Yelena finds herself on the run, wondering if she will ever get her face back, wondering which face is hers. A breakdown.

It’s Daredevil, the superhero, who tries to save her. Yelena is hurting, she’s confused, she’s wanted, and she’s just spent the night in a dumpster.

The story is told so that we care about Yelena. We probably can’t understand her ridiculous and comic-booky predicament, but we sympathize. Natasha remains distant and deliberately inscrutable. But Yelena is dirty and broken; she is up close. We know her.

And that’s why, when she confronts Natasha for her cruelty, we know she is right.

Yelena: You stole… you stole me from me, Natasha. Why? Why would you do this to me?
Natasha: I wanted to save you.

Yelena was never meant to be Natasha’s replacement— I’ve seen writings on the internet that imply Marvel cooked her up because Natasha was getting too complicated. No. Yelena was Natasha’s foil, her post-Soviet counterpart, complete with 1990s meta-midriff. She was the villain, the rival, and someone Natasha wanted dearly to teach and to save. Yelena wasn’t there to replace Natasha, she was there to help show us who Natasha was.

This is Natasha’s lesson for Yelena: to succeed, she’ll have to kill herself.

And I am glad for this. I’m glad that Natasha is driven and hard and that she does not apologize, even when she should. Even when apologizing wouldn’t be enough. And I am glad that this is uncomfortable.

It isn’t, of course, so simple as, “Natasha’s destroyed her humanity, and she doesn’t want Yelena to make the same mistake.” Breakdown is a companion and direct sequel to Grayson’s earlier mini, which we see much more from her point of view. We know, through the context of continuity, that Natasha does get hurt. She does struggle. She’s not untouchable.

And we know just as well that Yelena is no victim, that as much as she hates being used, she could turn around and play the user. She isn’t a “good guy” and she’ll blow up a soldier if she can be sure he’s working for the other side. Yelena is driven by ambition, not mercy. But she has a mother and an aunt Olga. She has a life at home filled with warm hands and ordinary comforts, and this is no small thing to throw away.

But here: the fundamental thing Natasha must fight, her greatest and longest-standing foe, is the malice of her own code name. To be something more and greater then the tool that codename was shaped for. The irony is that her Red Room training and ruthless arithmetic are the only ways she has to escape her Red Room training and ruthless arithmetic. It is the paradox of her strength. Only by being Black Widow can she fight for her freedom to be Natasha.

But it’s a dangerous bargain, and it is good, occasionally, to be reminded of its price. We understand Natasha better if she’s occasionally not understandable. It’s a good moral for Yelena, unfairly purchased. And it is a good thing for us to remember— our heroes are do not need to be our role models. Be strong, be the strongest you that you can be, but be yourself first.

Fury: No. This was never about Stalyenko, or the bombs. This was Natasha trying to save Yelena. The thing of it is, Daredevil, Blondie down there sees things like you do… she thinks she’s a super hero… but Natasha, she’s the Black Widow. She’s the real deal. She knows better. She knows espionage is a nasty business.

This was maybe a more counterintuitive revelation than it seemed— Natasha is a superhero, and Yelena never has been. She was introduced as more amoral, and not uncoincidentally, more Russian. Which isn’t to say that the quality of being Russian goes hand in hand with being evil, but her nationality was her primary motivation, and patriotism is the virtue of the vicious. In the post Cold War world you can’t have Russians versus Americans be a four-color beat ‘em up any longer. Yelena had a false frame of reference, and so she confused espionage for heroism and that let her kill without compassion.

Natasha, by contrast, knows the game she’s playing and can find rules to define herself outside of it.

But it isn’t a clean break. She’s trying to save Yelena, but the way Natasha goes about it isn’t superheroic at all. Daredevil, resident wearer-of-tights, calls it “sadistic"— and he’s right. She goes to lengths and uses methods most other Avengers would balk at, even if her motives are clear and true and cape-y. Natasha can’t help it; it’s how she was taught to think. She’s the Black Widow, she’s the real deal, even if she rather wouldn’t be.

If Natasha is the more "heroic” of the two she may be the more ruthless. She knows, and understands, the parts of her life she has sacrificed.