The good Yelena stories are in the Itsy-Bitsy Spider TBP.  Unfortunately, the Pale Little Spider MAX mini, which stars Yelena, hasn’t been collected.

The other two feature mostly as supporting characters. Monica Chang first appears in Ultimate Comics: Avengers, and then as a recurring character in Ultimates books.

Jessica Drew first appears as Black Widow in All-New Ultimates, and she has a few good moments in that book. But I’d recommend her earlier appearances as Spider-Woman to understand the character.  She first shows up in the Ultimate Clone Saga, and continues to show up in Ultimate Spider-Man, then later joins the Ultimates when that book becomes Ultimate Comics: Ultimates. This TPB guide to the Ultimate Marvel Universe will give you the reading order.

For Claire Voyant, I recommend The Twelve.

That is the original Black Widow origin:

Satan: By the almighty evil— I command you to change into— the Black Widow! 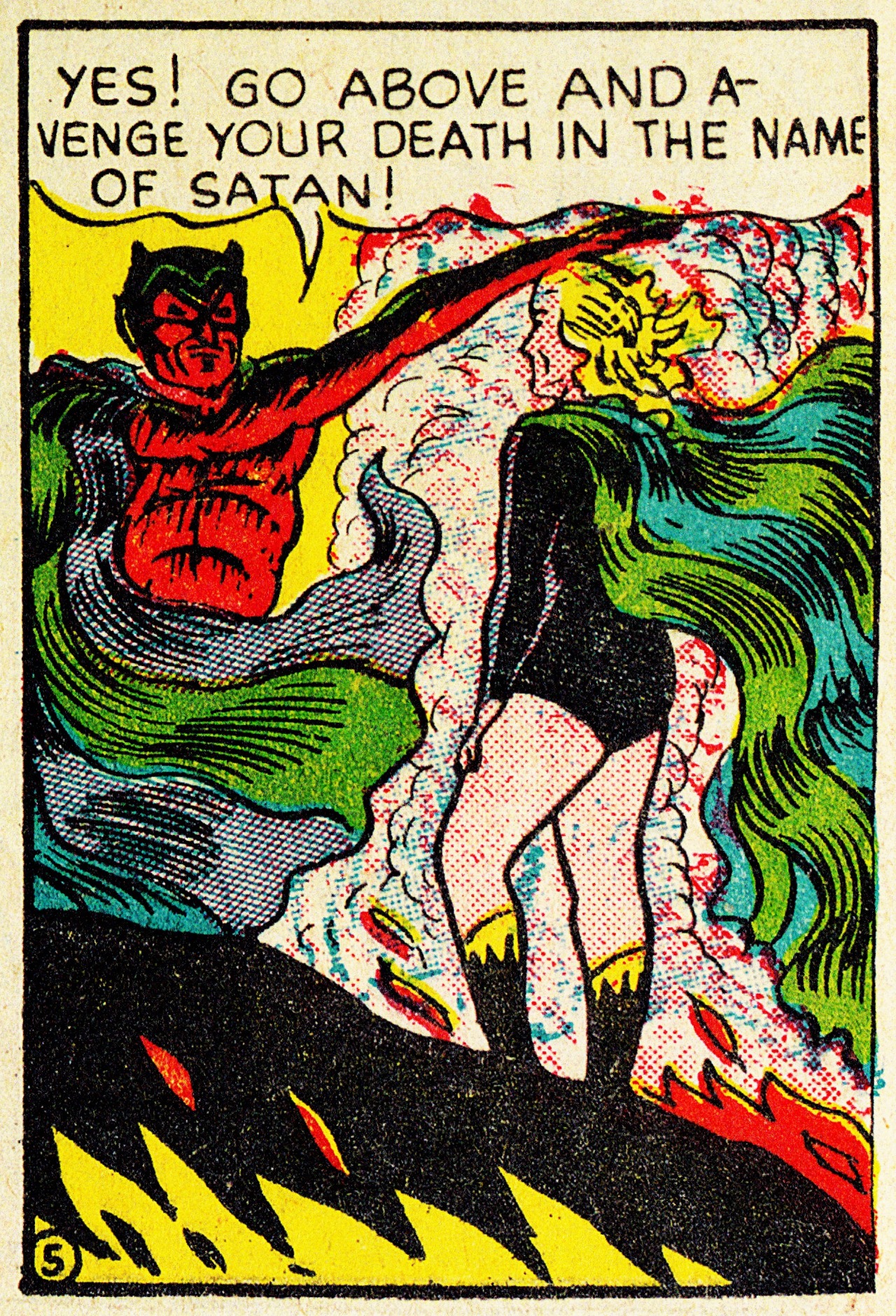 It depends on how you define your terms, anon. Marvel began as Timely Comics in 1939. Their first costumed, powered ladytype debuted Mystic Comics #4 in 1940: 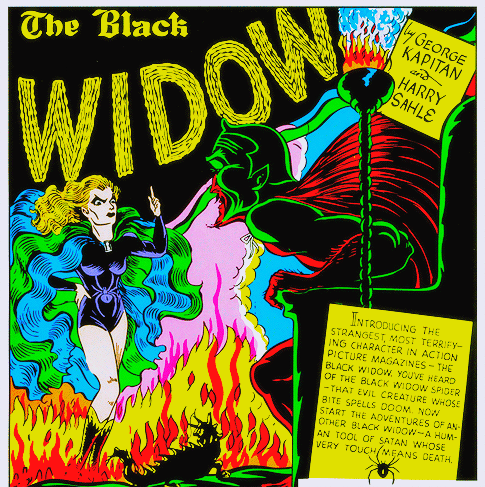 Now start the adventures of another Black Widow— a human tool of Satan whose very touch means death.

Timely was slow to get on the bandwagon even after Wonder Woman was a huge success at DC, but eventually they debuted Miss America in 1943. Miss America was so popular that she got her own book, Miss America Magazine. Miss America was followed by characters like the Blonde Phantom, Sun Girl, the mysterious beauty, and Venus, who all got their own books or back-up strips. Some of the old Timely stars made it into the Marvel universe, like Captain America, Bucky, and Namor. The women didn’t, with the exception of time travel and niche retro-revival stories like The Twelve and Agents of Atlas.

Timely cancelled superheroes in 1949, and rebranded all its hero books as romance titles. Human Torch became Love Tales, Blonde Phantom became Lovers. Once upon a time, comics didn’t have a problem targeting teenage girls. Patsy Walker was introduced in a back up feature in Miss America Magazine in 1944, and she soon became the most successful female lead the publisher’s ever had. In 1976, she became the Marvel hero Hellcat, so you can make the argument that she’s really Marvel’s first stand-alone heroine. She’s certainly a huge part of the company’s history that doesn’t always get remembered in 75th anniversary specials. Patsy Walker #95 was the first issue to be labelled “Marvel Comics” when the company changed its name.

Fantastic Four debuted in 1961, and that’s where the Marvel universe really began. Some of the old Timely characters came back, but they were given fresh starts and new plot hooks: Namor was amnesiac and had lost his kingdom, Captain America was a man out of time, and she shared universe was distinctly Marvel, not Timely.

Notable heroines of this era include Jean Grey (1963), Scarlet Witch (1964), and of course, Sue Storm (1961). All of these heroines appeared as part of a clear-cut team. One who didn’t is the Wasp, who debuted in 1963. Jan was clearly a junior partner to Hank Pym, but she had her identity and origin story set before she appeared in the first issue of the Avengers.

Natasha debuted a little after Wasp, in 1964, but as a villain. Here she is on a spread from Tales of Suspense #55: 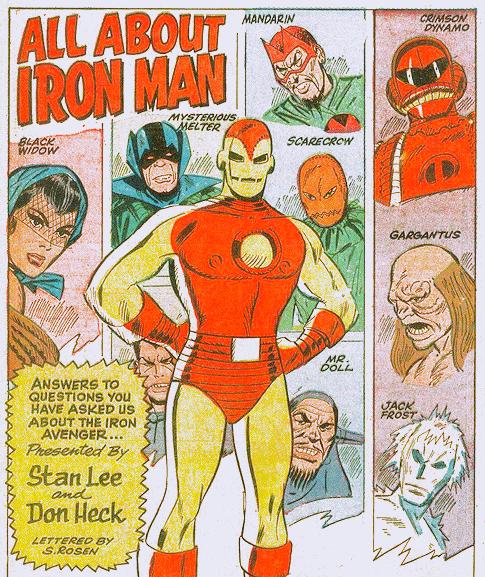 While Natasha quickly got caught up with Hawkeye and didn’t get a costume until after they became partners, she was never his sidekick. Clint joined Natasha’s ongoing plotline and served her pre-existing motivations, not the other way around. As villains, though, they certainly couldn’t count as superheroes, and they were never the ones carrying the story. Like the page says, it was really “All About Iron Man.”

Natasha didn’t become a hero until she started appearing in Avengers, as a supporting character for a team. In 1970, though, they spun her off into her own ongoing feature, the first superheroine to get that treatment under the Marvel imprint, about ten years after Fantastic Four #1. The first definitely Marvel heroine to debut in her own comic was Greer Grant, in 1972.

I think you could make a case for any of these as “Marvel Comics first solo-not-part-of-team lady superhero.” The important thing, to me, is that that there are a whole lot of weird-slash-wonderful heroes worth remembering.

They put the Black Widow in the women’s barracks. Has the whole place to herself now. Apparently she seriously weirded them out.

From The Twelve #12, by J. Michael Straczynski and Chris Weston. 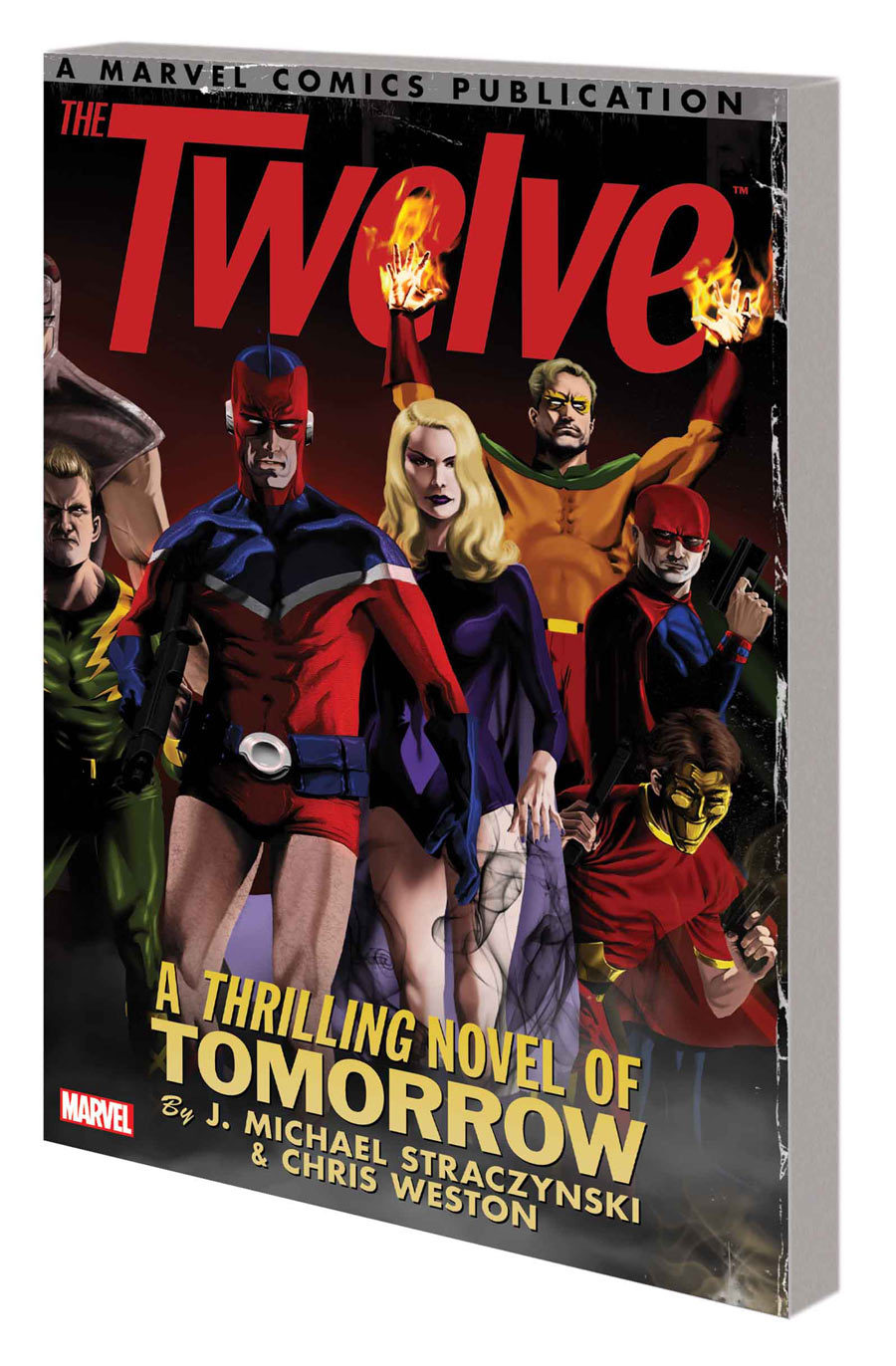 THE TWELVE: THE COMPLETE SERIES TPB
Written by J. MICHAEL STRACZYNSKI & CHRIS WESTON
Penciled by CHRIS WESTON • Cover by KAARE ANDREWS
Yesterday’s men of tomorrow — today! The Phantom Reporter. Electro. The Black Widow. The Laughing Mask. The Blue Blade. Dynamic Man. Mastermind Excello. Mister E. The Fiery Mask. The Witness. Rockman. Captain Wonder. Lying dormant for sixty years, these twelve heroes awaken in a tormented world that needs them more than ever. But has the world grown beyond their brand of old-fashioned heroism? Behold the stunning post-modernist tale of sacrifice, betrayal and human nature by writer J. Michael Stracyzynski (TV’s Babylon 5, AMAZING SPIDER-MAN) and artist Chris Weston (The Invisibles, FANTASTIC FOUR: THE FIRST FAMILY). Plus: Journey into the past to follow the death-defying exploits of the Phantom Reporter on the front lines of World War II and witness his first encounter with history’s greatest super heroes! Collecting THE TWELVE #1-12 and THE TWELVE: SPEARHEAD.

If you ever wanted to know more about the Golden Age Black Widow, Claire Voyant, this is a great trade to pick up.

Some Black Widow stuff that’s easier to miss in the solicits! First, MARVEL FIRSTS: WWII SUPER HEROES TPB looks to be reprinting the first appearance of Claire Voyant. More importantly, ESSENTIAL MARVEL TEAM-UP VOL. 4 TPB will reprint Marvel Team-Up #81-85, probably the best Natasha story of the swingy seventies. It’s been on the recs list forever, but hasn’t been reprinted up til now.

Laura: I mean, it’s funny. You should be right, but you’re not. It’s as if— as if we come here and we dress like this because we’re plaing a role, like we’re still playing dress up. But with Claire— it’s like this is her world, you know? Like it was her world before we discovered it. We play at all this. She lives it. Sometimes I think she’s been living this since before there was a this.

Somehow, The Twelve #9 came out this week. It’s a maxi-series about a bunch of Golden Age heroes catapulted into the modern day, because that’s worked so well for Marvel comics before. One of those heroes is the Claire Voyant, the original Black Widow and everyone’s favorite messenger of Satan.

From The Twelve #6, by J. Michael Straczynski and Chris Weston.

Claire: I have fulfilled my mission.
Satan: Hah! Little do persons of evil know the plans I have for the immortal Black Widow!
Claire: Yes, master— tell me!
Satan: On the upper world are mortal creatures whose hearts are blackened with wickedness and corruption. You, the Black Widow, will bring their evil souls to me!

What evil doer will be next to feel the fatal touch of the Black Widow? Another Black Widow story next month!

And that’s the story of Claire Voyant, tax collecter of Satan! The concept is sort of reminiscent of Ghost Rider, except without the motorcycle and without Nic Cage. This was first published in 1940, Timely Comics’ first female lead character, just as the other Black Widow would be Marvel’s first superheroine star thirty years later. I wonder if they were playing off the success of the antihero Sub-mariner— though Claire’s duty is to punish the wicked, she’s not exactly a good guy herself. It’s interesting to me that, while there was some obvious allure to a blonde dressed in a leotard and high-heeled boots, tragic romance or temptress tropes don’t play into this at all, even though the black widow spider is famous for devouring her mate.

I’ll post some of Claire’s modern 616 appearances and her revised origin from The Twelve another day.

From Mystic Comics #4, by George Kapitan and Harry Sahle.

That night, James is grieving his great loss.
James: Dead! All dead! Everyone gone!
Suddenly, a fiery red glow illuminates the dock.
Claire: I warned you I’d be back!
James: Y-you again?!
Claire: I must avenge my death— now!
James: W-why can’t you let me alone?
As the Black Widow’s hand touches James’ brow, a flame blazes forth and James falls— dead!
Claire: Vengeance has been mine— the master calls, I must return!

“Why can’t you let me alone?” is my new favorite thing to say to supernatural avengers. Also, check out those flame boots.

From Mystic Comics #4, by George Kapitan and Harry Sahle.