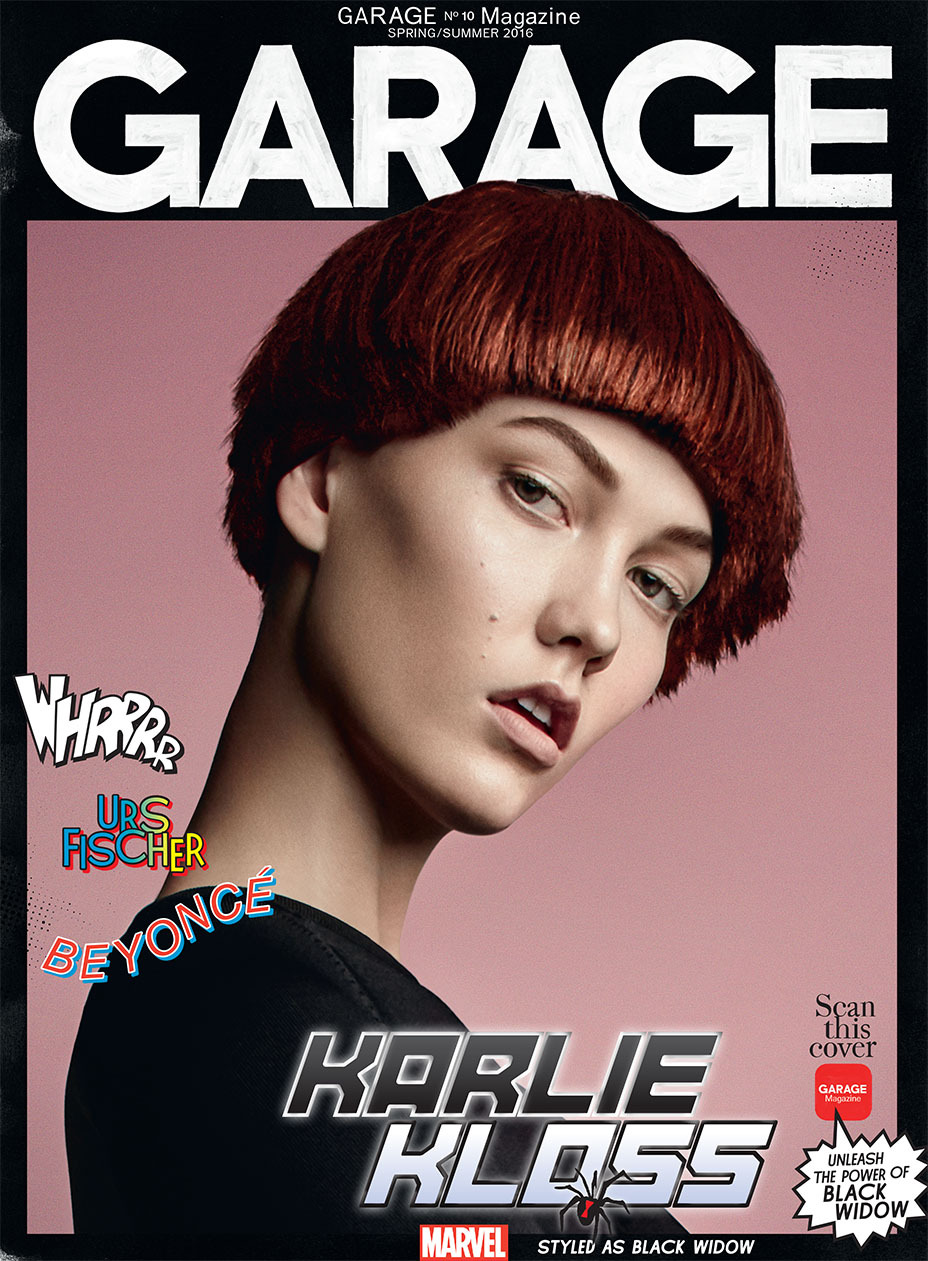 For NY Fashion Week, Garage magazine is running a series of special-edition tenth anniversary covers inspired by Marvel heroines, celebrating “the supermodel as the hero of the runway.” Karlie Kloss is styled as Black Widow. Kloss spoke about the shoot:

It’s important that young girls have fierce and strong role models to look up to and that’s what this project is really about. These role models come in many forms, from fictional Super Heroes to incredible businesswomen to strong female athletes.

You can see the rest of the covers here.

I think that’s deliberate, anon! Samnee has been reading Natasha’s appearances from the very beginning to prepare for the new series. From the EW announcement:

Over the past couple of months, I’ve been reading Black Widow. I started when she was a spy in Iron Man, and now I’m working my way up. I bounce around a little bit and sort of find a new way of looking at the character in all the different interpretations.

The semi-sweetheart neckline on the new costume pretty clearly echoes the design on her original uniform, minus the swag cape.

I don’t know how I feel about these costume tweaks yet, and I’ll probably need to see them in action for a while before I come to a final verdict.

For now, Zipperwatch™ is officially dead!! Our long national nightmare is over. No longer will I have to watch in terror as cruel comic book artists plunge Natasha’s neckline, as though a capable super agent were incapable of dressing herself all the way. No more artist adjustable cleavage! No more boobs-first nonsense! No longer will this costume “interpretation” be possible: 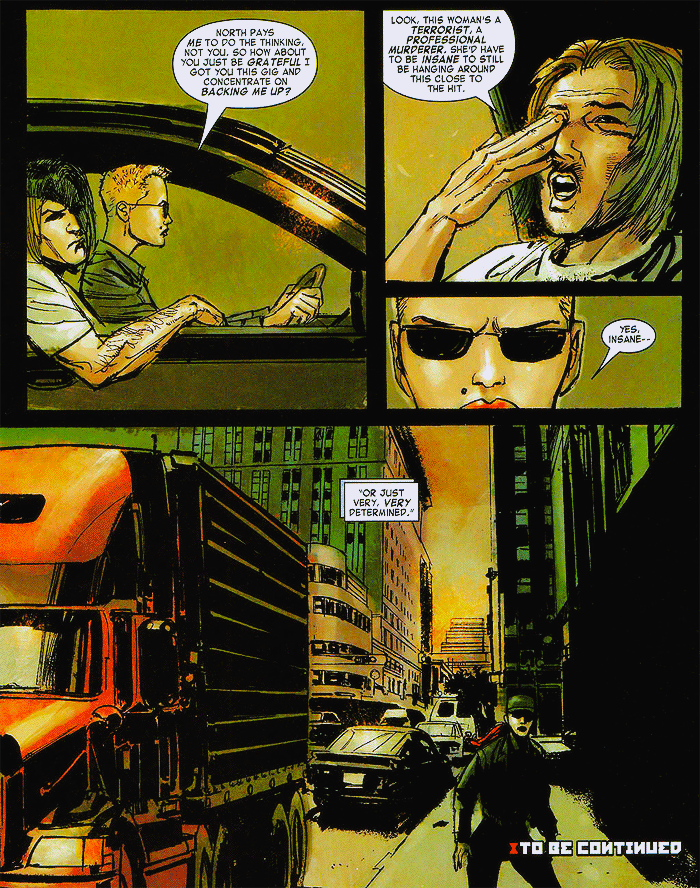 Martin: Look, the woman’s a terrorist, a professional murderer. She’d have to be insane to still be hanging around this close to the hit.
Kestrel: Yes, insane— or just very, very determined.

The lettered preview for next week’s issue is up at comicvine, and sees the return of Natasha’s stealth +2 baseball cap of desperate measures.

From Black Widow: The Things They Say About Her #2, by Richard K. Morgan and Sean Phillips.

Welcome to us joyously counting down the days until Captain America: The Winter Soldier lands in theatres for real and for sure. We’ll be saluting the various leads this week, so kick back, relax, and get your stars&stripes ready because we’re leaving no man behind.

With a long winter, third time’s the charm. Another play from her vintage past, but we’re getting more modern by the minute — this is Black Widow keeping a superheroic black sleekness on her cityscape sleeve.

whitehotroom.com is ready for this marvel cinematic madness

The bars that you mention on the back are extra batteries for her Widow’s Bite. If you notice, they’re the exact same size as the sections on her wrists. It’s all spelled out in the black jumpsuit’s very first appearance, back when superheroes had to explain getting dressed out loud to no one in particular and with lots of exclamation points:

This chain belt I’ve added will be more than decorative! It’ll hold my spare web-line… and store the powerlets for my Widow’s Bite! There! With my modified wrist-shooters in position, I’m ready for anything!

Here in this story the circles hold extra wire, too.  In the 1982 original Official Handbook of the Marvel Universe, the belt was described as having her belt of “metallic disc-cartridges” was described as containing “a plastic explosive equivalent to 4 pounds of TNT. So, it’s also full of bombs.

Neither of these details are remembered particularly often in comics, especially since the look of her belt varies so much from artist to artist. Sometimes the belt develops strange new powers: in Fear Itself: the Black Widow Natasha has a signal jamming device hidden in one of the belt sections.

I, for one, would like to see her carry around some kind of anti-mindwipe spray.

With a nod toward her femme fatale of Tales of Suspense past, nothing says spy game like all black against snowy bright backdrop to really confuse the enemy. But channeling Black Widow on a fashion front is like crushing winter beneath your combat heel, and I’m happy to oblige.

whitehotroom.com is going to play this spy game to win

What Would Black Widow Wear?

A lot of black, that’s what. A lot of gorgeous, stylish, and incredibly chic black.

You can see all of the looks over at WhiteHotRoom.com where we are current taking part in celebrating Black Widow Week.

We’ve all felt that con season fever, and for first-timers wanting to whip together a little cosplay something with limited time and skills — well, comic book Black Widow is the perfect place to start! With a simple black base and only a few key components that speak to Black Widow’s visual makeup, you’ll be a leading lady Avenger in no time.

whitehotroom.com is ready to help you fight the good fight