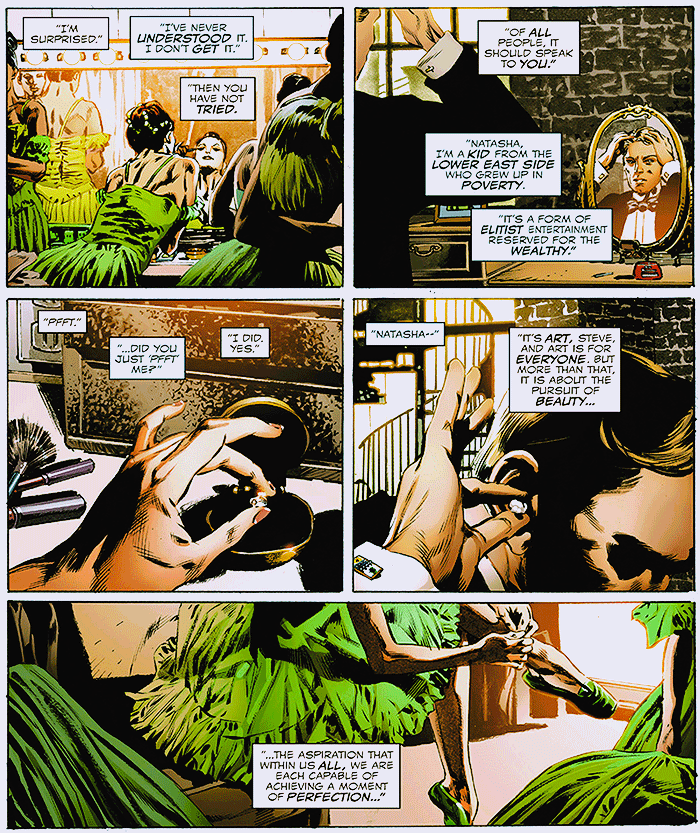 Steve: I’ve never understood it. I don’t get it.
Natasha: Then you have not tried.
Steve: Natasha, I’m a kid from the Lower East Side who grew up in poverty. It’s a form of elitist entertainment reserved for the wealthy.
Natasha: Pfft.
Steve: …Did you just ’pfft’ me?
Natasha: I did, yes.
Steve: Natasha—
Natasha: It’s art, Steve, and art is for everyone. But more than that, it is about the pursuit of beauty… the aspiration that within us all, we are each capable of achieving a moment of perfection… the right movement, in the right manner, at the right moment. 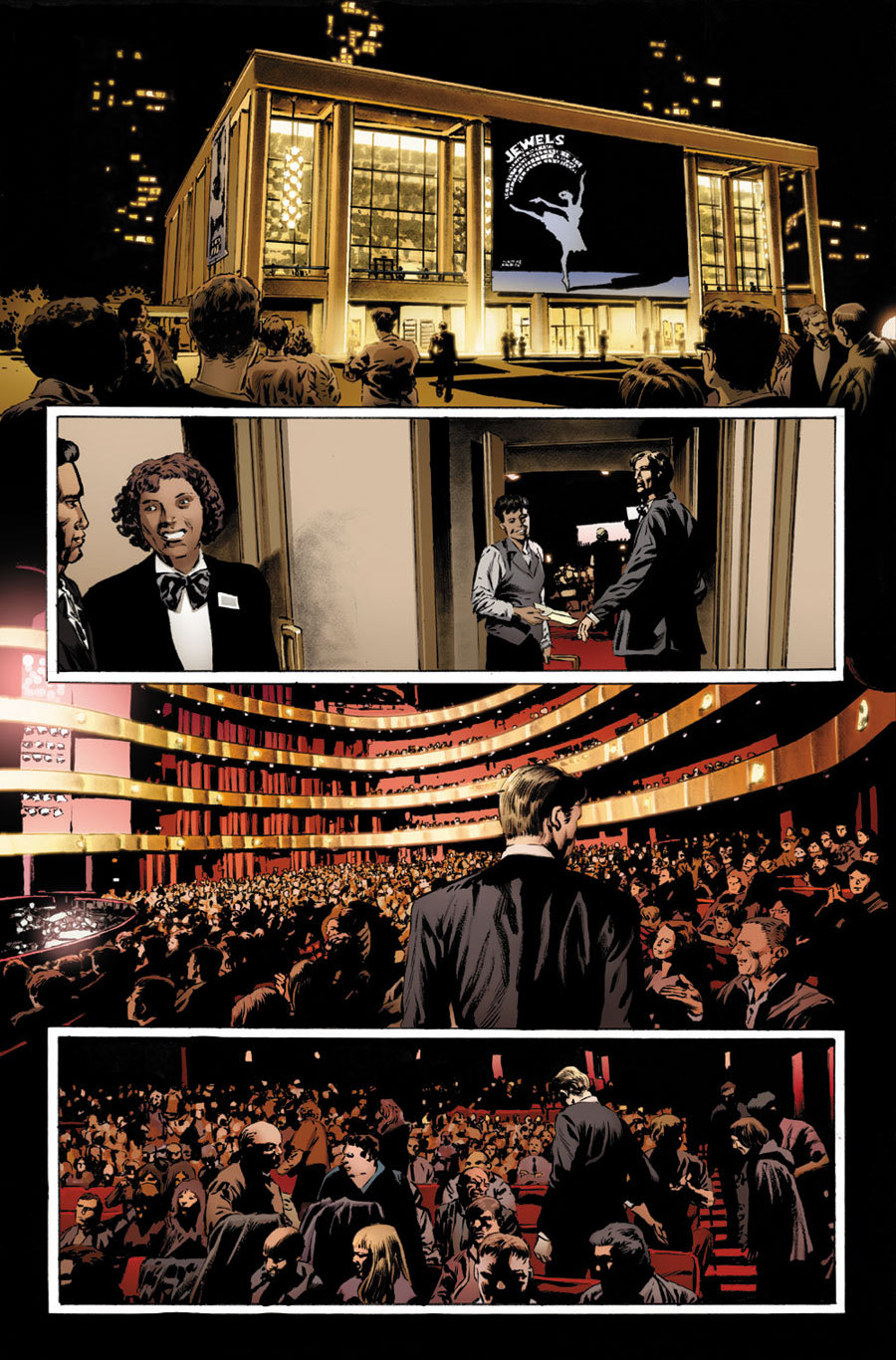 CAPTAIN AMERICA: SAM WILSON #7 also features some of the most celebrated creators in the industry paying homage to the history of the Sentinel of Liberty! Greg Rucka (The Punisher) and Mike Perkins (Captain America) bring you a team up in the Mighty Marvel Manner as Captain America and Black Widow join forces for a mission that requires the ultimate coordination. 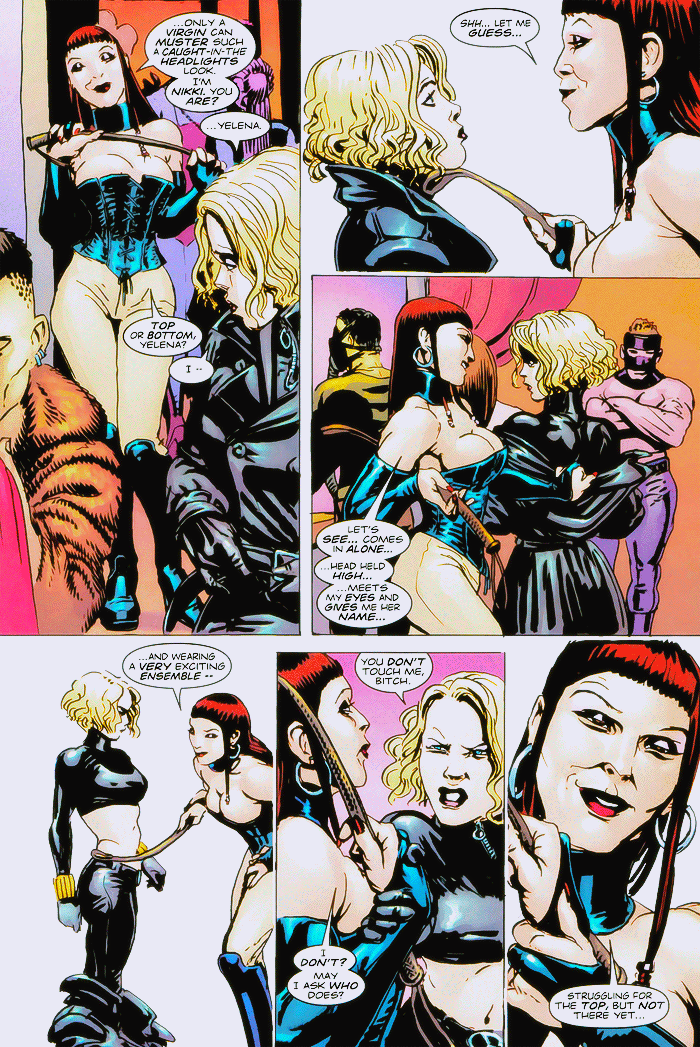 Nikki: Only a virgin can muster such a caught-in-the-headlights look. I’m Nikki. You are?
Yelena: …Yelena.
Nikki: Top or bottom, Yelena?
Yelena: I…
Nikki: Shh… let me guess… let’s see… comes in alone… head held high… meets my eyes and give me her name… and wearing a very exciting ensemble—
Yelena: You don’t touch me, bitch.
Nikki: I don’t? May I ask who does? Struggling for the top, but not there yet…

Let’s talk about Pale Little Spider, an early-2000s MAX miniseries starring Yelena Belova, set primarily in a sex club. When you hear a description like that, it’s easy to have certain expectations: lots of boobs, lots of sex, lots of the stuff they don’t normally let you see in Marvel comics.

But this miniseries uses these expectations to challenge them: Yelena, the protagonist and hero-if-the-story-has-one, is deeply uncomfortable with the sexual expectations placed on her. Tellingly, she never “embraces” her sexuality, never becomes comfortable wielding the power of projected desire, does not learn how to weaponize her femininity. Yelena’s sexuality and desire remain ambiguous: what she does learn better are her own boundaries.

At the same time, Fabrika, the club, is full of human bodies, human fantasies, and human beings: Nikki gets almost as much character work as Yelena. And the twisted Petra is ruined not by the sex work, but by the implicit traumas of her military service and the willingness of the GRU to exploit them. There is a direct and condemning parallel drawn between the sexual commodification of women and their supposed mute interchangability, which is not always sexual. Though Yelena wins through violence, it is unclear whether she has found any real way out.

Though yeah, the Greg Horn covers are gross and ultra-porny1, the interior art by Igor Kordey is another story. His linework is voluptuous but unpretty, showing the folds in pople’s flesh and the shadows hatched across their faces. His figures are unheroic and unidealized, like Gaydos’s work in Alias. They look like people. Moreover, they look like different people, with distinct bodytypes and body language. This is essential to the plot, which hinges on a wannabe Black Widow, and the narrative, which insists that women aren’t interchangeable. Kordey’s pencils aren’t perfect, and sometimes the action scenes are difficult to follow, but they’re still a big part of what makes the series work for me.

If the “Black Widow MAX series in a sex club” pitch promised boobs, sex, and sort of storytelling you can’t get in mainline hero comics, it really only delivered the last. This is the only place where the parallels commonly drawn between hero costumes and fetish gear can be treated honestly, with neither Yelena’s objections nor fetish itself treated as a joke. It is true that James Bond, perhaps, would never be subjected to a storyline like this. A James Bond sex club storyline would get action hero posters and long, suggestive looks by the camera. He would never feel demeaned. But Yelena Belova is not and could never be James Bond, and this story is about that.

1. Greg Horn covers were the bane of many early 2000s series starring women, including Slott’s She-Hulk, Ms. Marvel, and Emma Frost. He seemed to be their go-to cover artist for lady-led books. The Emma Frost covers were particularly bad, because that series focused on Emma during her high school years and was geared toward teenage girls.

Natasha: I have spent over a month hunting you! I will follow you! I will find you! And if not me, then others! I found you here, do you not understand? If you do not surrender yourself, this can only end in death! Mine or yours, but one of us! Castle! I will not stop pursuing you— I will never stop—

In honor of this week’s Punisher/Black Widow crossover, I thought I’d post a scene from one of my favorite Natasha comics of the past few years, Punisher War Zone #2. Greg Rucka’s excellent run on Punisher was a meditation on the power of missions— the way a mission can transfigure, make someone more than human, and less. In this story Natasha spends a month tracking a nearly wordless Frank Castle to a remote jungle. But Frank loses her when he runs through a camp of child soldiers. She stops; she can’t abandon them until she knows they’re taken care of. Frank knows the score, knows the mission, is the mission in ways she cannot let herself be. 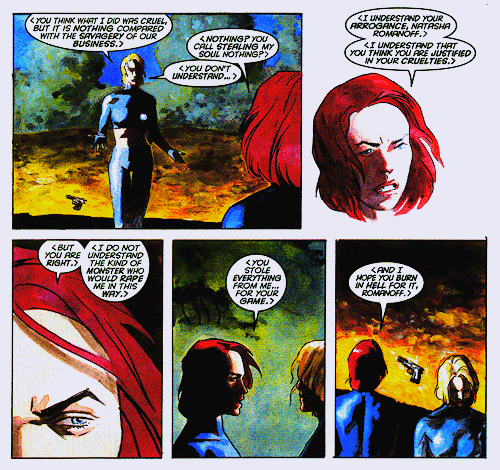 Natasha: You think what I did was cruel, but it is nothing compared with the savagery of our business.
Yelena: Nothing? You call stealing my soul nothing?
Natasha: You don’t understand…
Yelena: I understand your arrogance, Natasha Romanoff. I understand that you think you are justified in your cruelties. But you are right. I do not understand the kind of monster who would rape me in this way. You stole everything from me… for your game. And I hope you burn in hell for it, Romanoff.

This sequence has so many sharp points. What strikes me on this reread is Natasha’s carefully-reckoned moral code— “it is nothing compared with the savagery of our business"— and how it unravels, like most codes do. Natasha’s strength, in the two Yelena stories, is meant to be her dispassion. She does not love her work, and so refuses to lose herself in it. But she has still suited herself to cruelties, and so she cannot always see them.

In this last confrontation, Yelena alone is allowed her whole face. But then, it is not her face.

Peter: You let him go… You had the Punisher, and you let him go.
Natasha: That is, of course, one way to look at it.
Peter: Here’s another way to look at it, Natasha: you let a amass-murderer go free.
Natasha: Yes. But I also saved 117 young boys and girls from lives of disease, depravation, starvation, exploitation, and war. So in the balance, I think I made the right choice. And we both know that you think so, too.

“Because I know death so well… I know how supremely precious life is.” See, Greg Rucka gets it, too.

Natasha: We… had to know what Stalyenko was doing, Yelena. We had to stop him.
Yelena: There were other ways!
Natasha: Yes, there were, but… I wanted you to understand, finally, what it meant to be a spy. We are not like Daredevil or the others, Yelena, we are not heroes. We are tools. And tools get used.

I think this is maybe what Whedon was talking about when he said: “She’s not a hero, you know, and it’s something that I read and I feel bad that I can’t remember who wrote the book, but it’s in one of the books explaining ‘These guys are heroes, you are a spy. It’s a different thing, it’s a different skill set, and you don’t have their moral high ground or any of that good stuff’ and that just makes her so interesting to me.” Or, I hope so, anyway, because if he’s basing Avengers 2 script on the Grayson/Rucka stuff, he’s doing it right.

I’ve written about the spy vs superhero thing before, but it drills down to this. Natasha became a superhero to escape her old spy life, but she can never get all the way out. The skills that the Red Room taught her are what let her be an Avenger. And as long as that’s so, the line between who she is and who she was will always be murky, grey.

After all, she still wears her old codename.

You might have heard— Marvel is doing a gigantanormous 700 issue free digital bonanza and this means for the first time I get to do a masterpost for some of my favorite Black Widow comics!!

Black Widow v6 #1 (url)
The kickoff to the 2010 ongoing is still my preferred intro point, because this is a kickass run of comics that mixes grade-A character study with the context of the wider Marvel universe. Again, this is the Natasha story I think everyone should read. This story arc continues with #2-5 of the same series.

Black Widow v1 #1 (url)
The 1999 mini introduces Yelena Belova, a second Black Widow and mixes glossy international espionage with themes of identity and individuality. I still love this one, and it was my go-to rec before the 2010 ongoing came out. Continues in #2-3 of the same series.

Black Widow v2 #1 (url)
This is a spiritual sequel to the first Grayson mini, and is a mean, twisty mindfuck of a story. I like this because it shows Natasha at her worst, and also shows what drives her there. Continues in #2-3 of the same series.

Enter the Heroic Age #1 & CA and the Secret Avengers #1 (url & url)
Two linked one-shots by Kelly Sue DeConnick, involving copious ladysnark, over the top Bond-villainy, and an assortment of cute coats and puppies. Read Enter the Heroic Age, then the SA issue.

Fear Itself: the Black Widow (url)
This takes place during the Fear Itself megacrossover but you don’t need to read the big crossover to understand what’s going on. I like how this one explores Natasha’s ruthlessness in the context of her vulnerability, and the art is lithe and elegant.

These are all #1 issues, so they were written as starting points and should be easy for anyone to download and digest.

ETA: the demand on comixology’s servers caused them to pause the promotion, but fill out this form and they’ll let you know when you can get your free comics.

Peter: You let him go… you had the Punisher, and you let him go.
Natasha: That is, of course, one way to look at it.
Peter: Here’s another way to look at it, Natasha: you let a mass-murderer go free.
Natasha: Yes. But I also saved 117 young boys and girls from lives of disease, depravation, starvation, exploitation, and war. So in the balance, I think I made the right choice. And we both know that you think so, too.

Bobby: Right then, Ms. Bannister… looks like your money just ran out.
Natasha: Oh, Bobby. Did you have to be so predictable? In a forest crawling with danger, from the Lord’s Resistance Army to M23 to beasts and disease and despair… you never realized the most dangerous thing here… is me.
Bobby: Shoo! Bloody shoot—