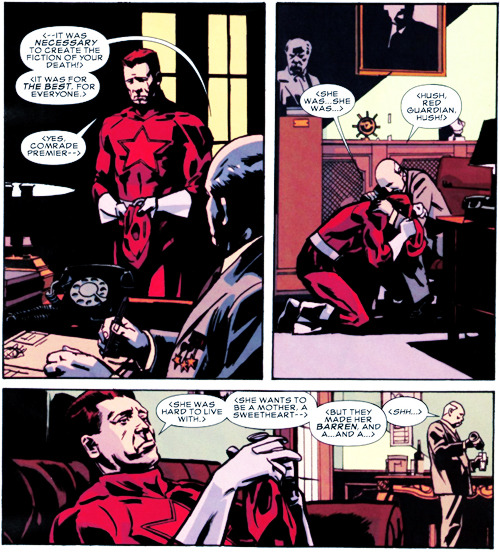 Alexi: She was hard to live with. She wants to be a mother, a sweetheart— but they made her barren and a… and a…

Paul Cornell reprised this point in his uncomfortable blending of false memories and arranged marriage. Again we see that false dichotomy: a mother and a sweetheart, barren and a… possibly a less-noble word for warrior. The joke’s on Alexi, here, though, because by Cornell’s take she’d been a fighter long before she feel in with the KGB. If they turned her into anything it was a “sweetheart”— but that can’t be so, because that’s not what the Red Room is for.

A mother, a sweetheart, then, is what Alexi himself wanted from Natasha, a warrior what the Soviet state demanded. What Natasha wants for herself goes unsaid. Like with Lyudmila, there’s an inversion in how this scene is framed. Earlier, Natasha, the good housewife stormed into the same office demanding an intelligence post. And here, though it is Alexi who is dead and Alexi who is wearing the hero’s uniform, it is Alexi who is sobbing, embracing others for comfort.

Medic: Do you want to save your friend’s life just to give him a ticking clock?
Nick: ‘Tasha? It’s your decision.
Natasha: James actually prefers long odds… do it.
Medic: All right then…

Ivan: Just you fron now on…proud of you. My little girl—
Winter Soldier: The comrade needs medical treatment. My superiors offer you both this chemical in exchange for your renewed loyalty. It will heal him— and increase your life spans. But there is an extremely limited supply, comrades.
Ivan: Don’t…don’t…
Natasha: We say yes.

I wanted to highlight the way these two scenes mirror each other instead of pointing out how this just happened in the last arc of New Avengers. Both times we see Natasha in charge of administering immortality juice to some guy she loves with a hole in his chest, and both times she decides damn the future steroid testing, full speed ahead.

But there’s a huge difference: one of these scenes is a mistake, the kind of mistake you have to spend the rest of your life making up for. The other takes place 50 years later and is an escape from the consequences of a capital-e summer Event. So, heh, did Natasha learn anything in those fifty years?

Obviously, where she screwed up the first time was pledging herself to a lifetime of service to an oppressive black ops regime. But she also was paying more attention to what she wanted for Ivan than to what Ivan wanted for himself. Giving him that shot of comic book juice prolonged his life, but didn’t save it. Ivan just twisted up into a cruel shell of a person— he couldn’t cope with all that time. She couldn’t have known that, of course, but Ivan did tell her to say no. She didn’t listen.

With Bucky, at least, she makes reference to what he would want. The scenes work to such different purposes, I’m pretty sure there’s no echo intended. But the echo’s there anyway. The scene with Ivan was such a turning point for her, how could she not remember it when confronted with such a similar dilemna?

From Fear Itself #7.1 by Ed Brubaker and Butch Guice, & Black Widow: Deadly Origin #1, by Paul Cornell and John Paul Leon.

Winter Soldier: Thank you, comrade— for coming here in person to tell me of your forthcoming marriage. We were sweethearts. Now we are not. It’s a great honor to marry a test pilot hero of the Soviet Union.
Natasha: Yes, comrade Winter Soldier.

Some follow up to this question and this scene. Winter Soldier’s attitude towards Natasha’s impending marriage is completely different here than in the Captain America scene, but I don’t think either is necessarily wrong. The man in this scene is very dutiful Soviet automaton (everyone is named comrade!!), the man in the other flashback is reminiscent of the real Bucky Barnes. It’s not hard to imagine that his personality’d change depending on how well he was overcoming his programming.

Natasha: Hah! Don’t you think Khrushchev would have laughed to see us now?
Bucky: I guess with the old Soviet dialectic— they liked us being two things. The Winter Soldier and Captain America…
Natasha: Only I’m more than two things, James. This plan seems designed to remind me of how… splintered…
Bucky: You could be… if you weren’t so tough.
Natasha: Thank goodness you’re immune.

The most interesting thing in Deadly Origin, besides Leon’s artwork (not pictured), was the specific historical grounding Cornell gave to her backstory. Khruschev wasn’t just a ghost mentioned in passing, he was actually a player in the narrative. I know and understand, to some degree, why people dislike the idea of Natasha’s infinity-formula expanded backstory. It complicates things, and god forbid comic book characters be complicated.

But the truth is Natasha’s character concept is as historically rooted as Steve Rogers’. And it’s much easier to explore in this kind of grand retrospective than within the constraints of the sliding timeline. Khruschev made an appearance in her 1964 debut, too.

Natasha: Ivan, I got some water… the gangs left nobody alive. I can’t find a medic. Take this, I’ll try again.
Ivan: Just you from now on… proud of you, my little girl—
Winter Soldier: The comrade needs medical treatment. My superiors offer you both this chemical in exchange for your renewed loyalty. It will heal him— and increase both your life spans. But there is an extremely limited supply, comrades.
Ivan: Don’t… don’t..
Natasha: We say yes.

This aspect of Cornell’s Black Widow origin was something I really appreciated. It’s a good retcon because it touches on the same themes of the previous story— it’s still about how Natasha’s loyalty to those she loves allows the KGB to manipulate her into becoming a spy. But repositioning the story so that it’s Ivan, and not Alexi, escapes a big my love interest is dead!! cliché. And I think this version highlights the determination in Natasha’s character. We understand that it’s a poor choice, that she really has no choice at all, but it still feels like Natasha is making a choice. (Instead of just being brainwashed or tossed into a killing school at the age of five.) She still didn’t want to be a spy— it was something she was strung into. But better that then dead.

Could’ve done without the Communist Cyborg Formerly Known as James Barnes here, though. Almost worth it just for the totally gnarly (and not super continuity friendly) take on his arm. Almost.