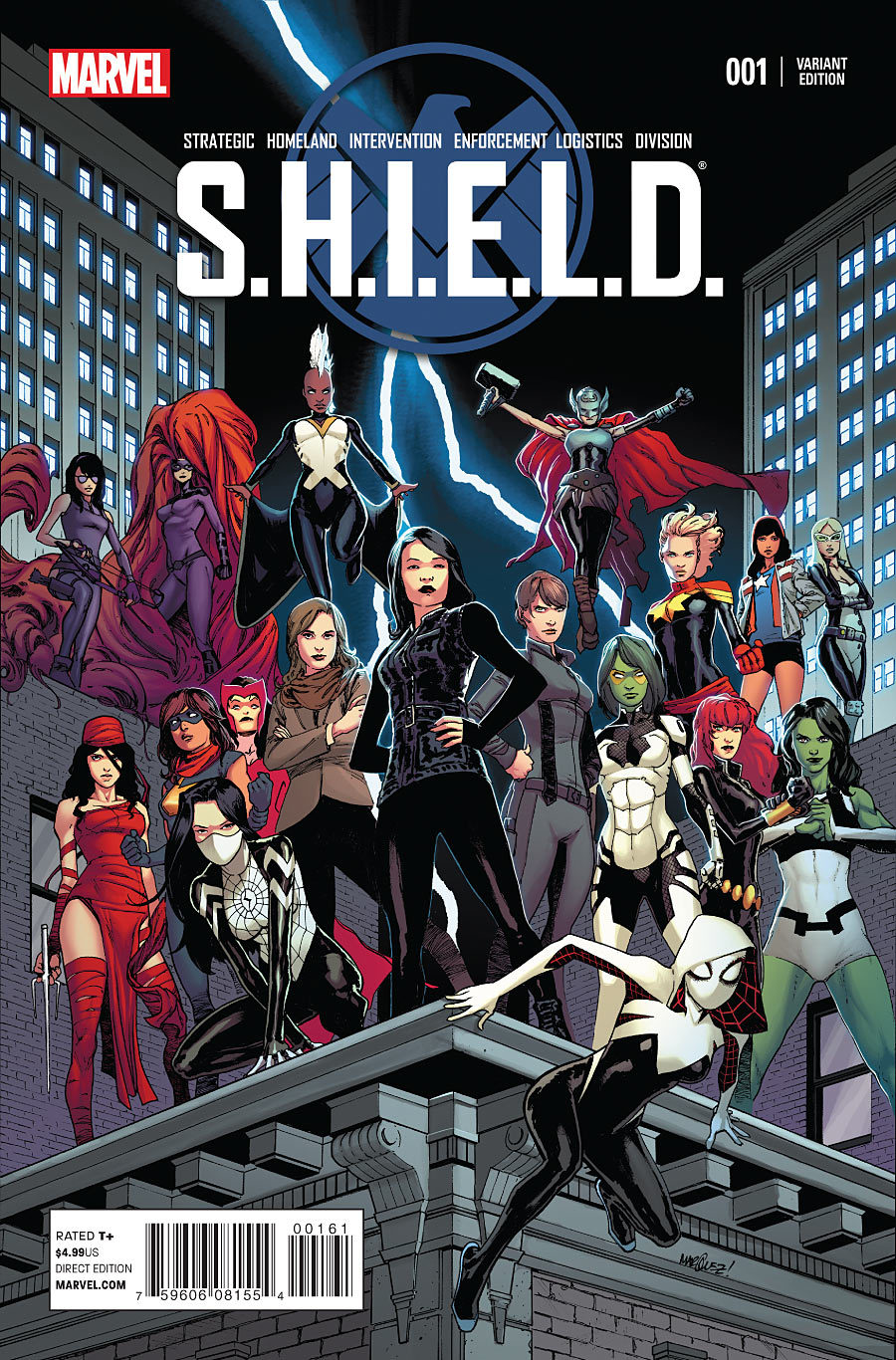 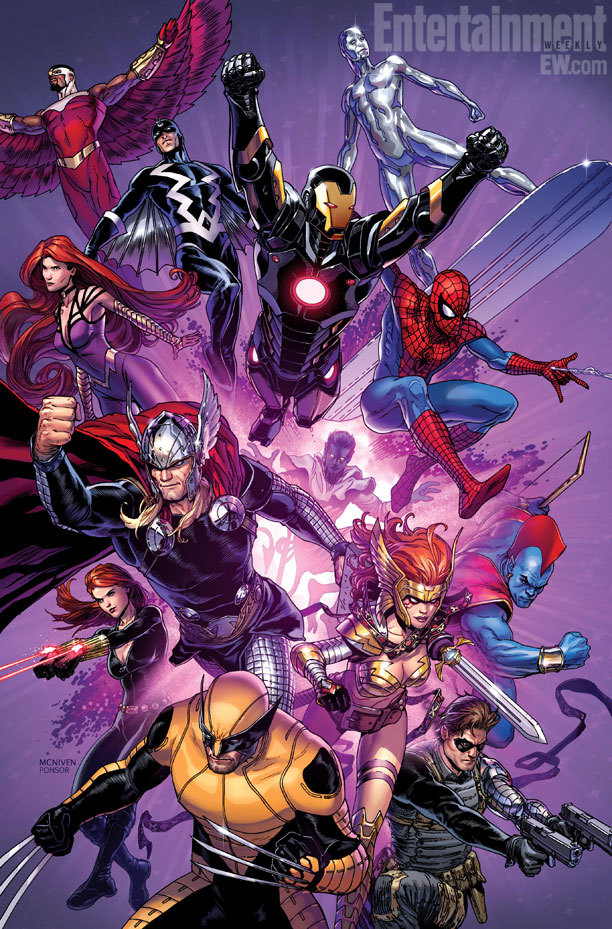 Marvel’s begun to tease the post-Infinity aftermath, Inhumanity, including announcing a new Fraction-written Inhumans ongoing. Black Widow and the Inhumans used to share a title!! But there’s more:

In the meantime, feast your eyes on this groovy exclusive image drawn by Steve McNiven, which shows some of the characters who will feature prominently in the post-”Inhumanity” status quo.

Characters include Nightcrawler, who is or is not dead, Angela, new-look Wolverine, various characters in movies or movierumors of some kind, and Natasha. With con/new book announcement season coming up and after teasing a new Black Widow project back in Februrary, I am beginning to get my hopes up. 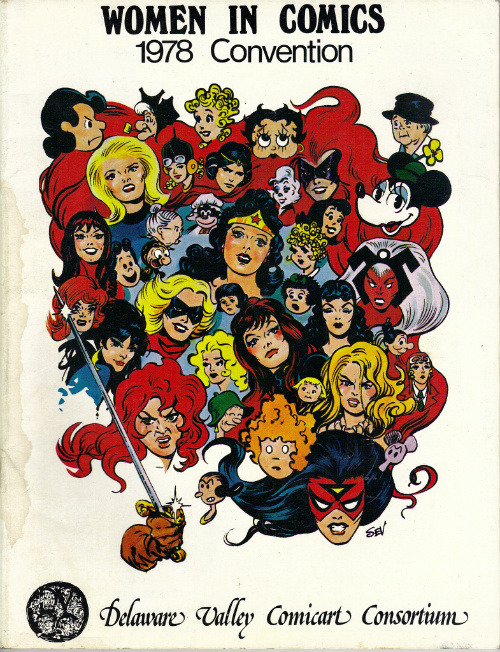 And now, lest you suspect that we’ve forgotten the vengeful Valkyrie and her newly-formed Liberators, lift your startled gaze skyward, and behold—
Wanda: The town of Rutland should be directly below us, Valkyrie!
Valkyrie/Enchantress: Excellent! Now does each of you know what she must do?
Medusa: Yes! But— I see some sort of battle going on in the streets— and the Avengers are involved!
Valkyrie/Enchantress: What? Then— someone else— no! We must not be robbed of our chance!
Jan: I’ll zoom ahead— see if I can slow things down a bit!
Valkyrie/Enchantress: Hurry, wench— hurry!

I’m not very fond of this issue or the Lady Liberators, but I can’t deny the awesomeness of their mode of transportation. Every superteam should ride a flying chariot!

From Avengers #83, by Roy Thomas and John Buscema.

From Girl Comics #1, by Colleen Coover. 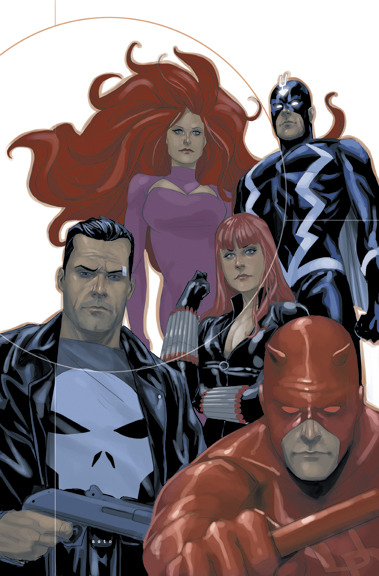 Everything I love in one picture…! This is beautiful.

Women of Marvel by Bruce Timm. 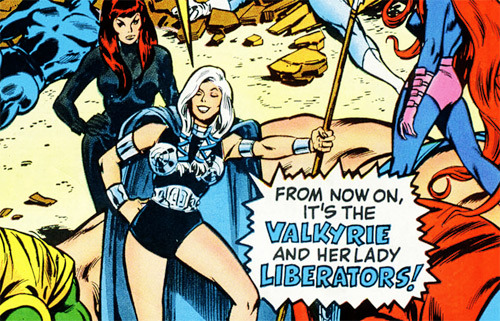 It took until the early 1970s for sixties radicalism to catch up to Marvel Comics, but catch up it did.  You know the score, Hal Jordan: you help the blue skins and the purple skins, but what about the black skins?  There’s a lot I could say about Natasha’s 1970s reinvention, the black catsuit adopted in Amazing Spider-Man #86 to fit in with the “swinging” era, her abrupt transformation from cold KGB spy to thrill-seeking, class-conscious hero-adventurer.  This was the San Francisco era of Daredevil, where Gerry Conway had his love affair with the Summer of Love a few years to late.  Hippies, hippies, everywhere, and one of them had to be Angar the Screamer.  But even as Conway was trying to jostle the straight-laced sensibilities of Matt Murdock, and even as he declared Natasha the “Gloria Steinem of the jump-suit set” there was something a bit… off.

No, no, Mr. Conway is not the only or worst writer to do this; he is simply the most consistent, when it comes to portraying any female who does not cower in the corner or behind her man when things get rough, to categorize her as 1) pushy – and usually hypocritical, 2) over-sexed, and/or 3) a castrating manhater.

This isn’t about Gerry Conway, though, it’s about Avengers #83.  By Roy Thomas and John Buscema, it marks the first appearance of the Lady Liberators, a team readers continue to ask for for reasons beyond my desires but not my understanding.  Its title is, Come on in, the Revolution’s Fine!  But is it?

The story opens with Wasp flitting about town with her usual stylish Janet ways.  When she enters the Avengers mansion she finds three unusual companions: Black Widow, who wasn’t a team member at the time, Medusa, and Valkyrie, a brand new superheroine.  Wanda makes five, and declares themselves the Lady Liberators.  Valkyrie explains her backstory and origin with the aid of a few quick flashback panels— a brilliant scientist shunned by the male establishment (“if I need a secretary, I shall contact you!”), one of her experiments left her with superpowers and a desire for mankind.  Val’s powers were strictly science based.  Her lightning spear, her flying horse, they were her own inventions, the product of her ignored intellect.

The women are all for some liberation, but they aren’t sure if attacking the (other) Avengers is quite the way to go about it.  Valkyrie’s counterargument is as follows: 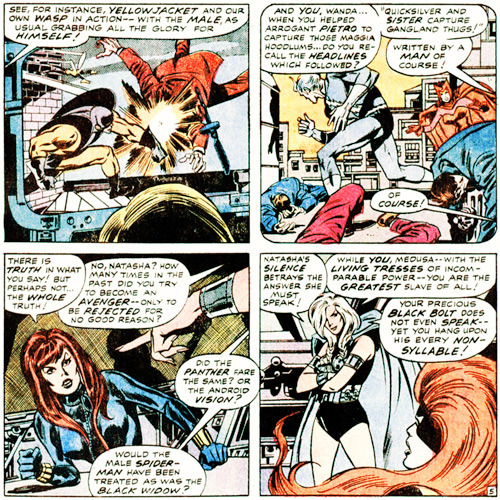 “Written by a man, of course,” just like this comic.  Just like nearly every comic of the era.  (The sadly short-lived Claws of the Cat series being an exception.)  Val’s recollection of events is tainted, rather than false—  like many posts you might find on today’s messageboards.  But damn the continuity flaws, full speed ahead.  It’s hard to deny that these characters haven’t gotten short shrift, written by a man, of course, written for other men.

But what about the men?  They’re in the town of Rutland, Vermont (surrounded by rich marble quarries, verdant, high-peaked hillsides, and far-famed ski resorts) disguising themselves as supervillains.  It’s Halloween.  Is this masking of the masks symbolic, meant to cast further suspicion on the men-as-oppressors?  Is Thomas attempting to use the festival of Halloween as a Bakthinian carnivaleque, foreshadowing a social order overturned only to be reinforced?   Do I need to step away from the JSTOR?

(There’s a cute meta-moment where Roy Thomas and his wife Jeanie show up at the Avengers costume party.  Jeanie looks rather lost, and on hearing the word Avenger starts asking for Mrs. Peel.  Women just lack genre-savvy.)

Then hark, an Avengers Halloween parade, and hark more, the Masters of Evil show up to crash it.  Hark harder: the missing Avengers women show up, and kick the bad dudes ass.  The harkening: after they’re done, they start kicking the good dudes ass as well. 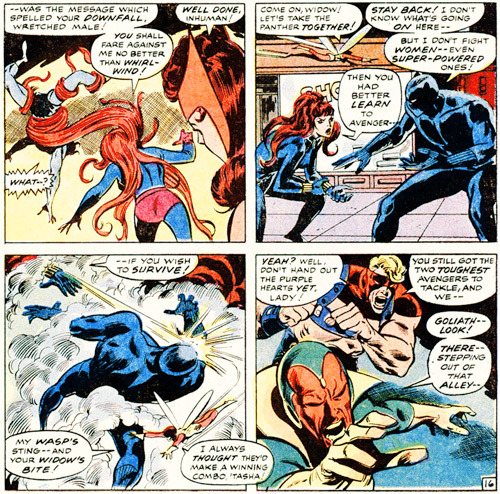 I’m torn a bit between appreciating Janet and Natasha’s teamwork, here, and the fact they needed to double team to take him down. The women do defeat the men, handily, but then the story takes another turn.

Valkyrie grabs a nearby cosmic power device doo-hickey and starts getting suspiciously muwahahaha about it.  Then we get the big reveal. 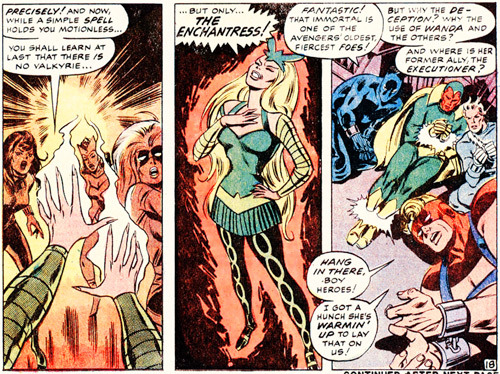 What’s more, Amora has hatched her sinister plan because, wait for it: her boyfriend dumped her.  Women’s lib, feminism, the patriarchy, it’s all just goddess crazy-talk, make-believe that has us worked into a violent tizzy.  Valkyrie is no brilliant scientist, but another scorned lover who just happens to have some magic to burn.  Wanda is the one who saves the day here, using her hex powers to force Amora’s curse back onto herself.  In the end, what’s left of the Lady Liberators is a punchline.

Clint: You birds finally learned your lesson about that Women’s Lib. bull!
Wanda: That’s what you think— male chauvinist pig!  One of these days the Liberators are going to stage a comeback— right Jan?
Jan: You know… they just might at that.

The problematic repositioning of feminism as part of some endless, intrinsic competition between genders aside, we’re supposed to see that maybe the Liberators didn’t get it all wrong.  Come on in, the Revolution’s fine… as long as it doesn’t cross the line into misandry.  Remember kids, there are the good feminists, who just wanted to be able to vote, and there are the bad feminists, evil harpy creatures bent on destroying all men.  But you run into a problem there besides the obvious: in these comics, there’s only one type of feminist.  And “male chavanist pigs” is her one rallying cry.  She’ll occasionally assert herself as a victim of sexism, and she might get to punch a particularly creep show villain every now and then, but her philosophy will never go much deeper than that, and it will always be defined by her opposing men.

Comic characters, of course, will speak in the most melodramatic manner possible.  And it shouldn’t be surprising that the “women’s lib” of 1970s Marvel was largely a laughable caricature drawn up by male writers, male artists, for a male audience.  Why should we care?

Because this 1970s trope didn’t stop there— Superia was just resurrected by Brian Michael Bendis in New Avengers, we’ll see if man-hate remains her primary motivation.  And the Marvel Universe is still dominated by that One Feminism, the kind slipped in with a wink and a nod as a sort of kitschy throwback that’s not throwing all that far back.  In Avengers Academy #3, the real Valkyrie explains to her female students: “The truth, sisters, is that men will inevitably disappoint you.  Intellectually, on the battlefield, and most of all… in the bedchamber."  She goes on to describe dildos.  That is what a feminist is, in a comic book, where everything is melodramatic and over the top.  It just also happens to be the strawman argument real feminists find themselves constantly fighting against. I hate sexism, but I hate it even more when it’s passing itself off as feminism.

But hey.  At least some of the men must have learned something.  Right, T’Challa?  Let’s check Black Panther v4 #23.

And people wonder why I’m not especially fond of the Lady Liberators.

It was the first time a character named Valkyrie appeared, but in this story she turned out to be the Enchantress in disguise!