The good Yelena stories are in the Itsy-Bitsy Spider TBP.  Unfortunately, the Pale Little Spider MAX mini, which stars Yelena, hasn’t been collected.

The other two feature mostly as supporting characters. Monica Chang first appears in Ultimate Comics: Avengers, and then as a recurring character in Ultimates books.

Jessica Drew first appears as Black Widow in All-New Ultimates, and she has a few good moments in that book. But I’d recommend her earlier appearances as Spider-Woman to understand the character.  She first shows up in the Ultimate Clone Saga, and continues to show up in Ultimate Spider-Man, then later joins the Ultimates when that book becomes Ultimate Comics: Ultimates. This TPB guide to the Ultimate Marvel Universe will give you the reading order.

For Claire Voyant, I recommend The Twelve. 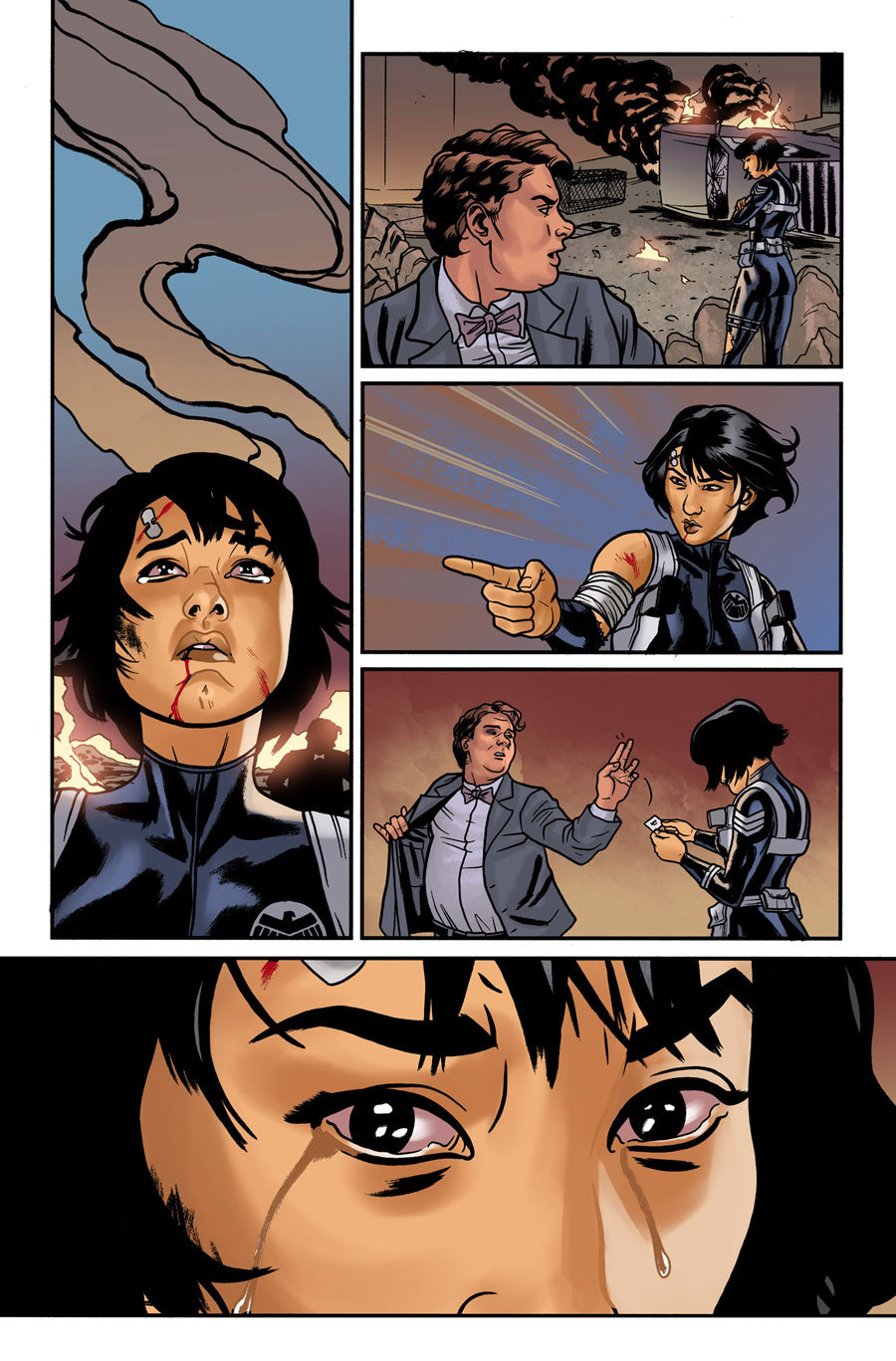 With the news that Jessica Drew is taking up the mantle of Black Widow in the Ultimate universe, there’s been some speculation on what that means for Monica Chang post-Galactus. Judging from this preview page, she makes it through the Ultimate Universe’s latest implosion alive if not wholly intact.

Preview from Survive #1, by Brian Michael Bendis and Joe Quinones.

AVENGERS A.I. #11
SAM HUMPHRIES (W) • ANDRE LIMA ARAUJO (A)
Cover by DAVID MARQUEZ
• Journey ten thousand years into the future of the Marvel Universe with the Avengers!
• Humanity is extinct – and machines battle across the galaxy!
• What is…the Galactus Bomb?

AVENGERS A.I. #12
SAM HUMPHRIES (W) • ANDRE LIMA ARAUJO (A)
Cover by DAVID MARQUEZ
• The stunning conclusion of AVENGERS EMPIRE!
• In the year 12,000AD, how have the Avengers evolved?
• It’s the Avengers vs. Dimitrios for the fate of the entire galaxy! 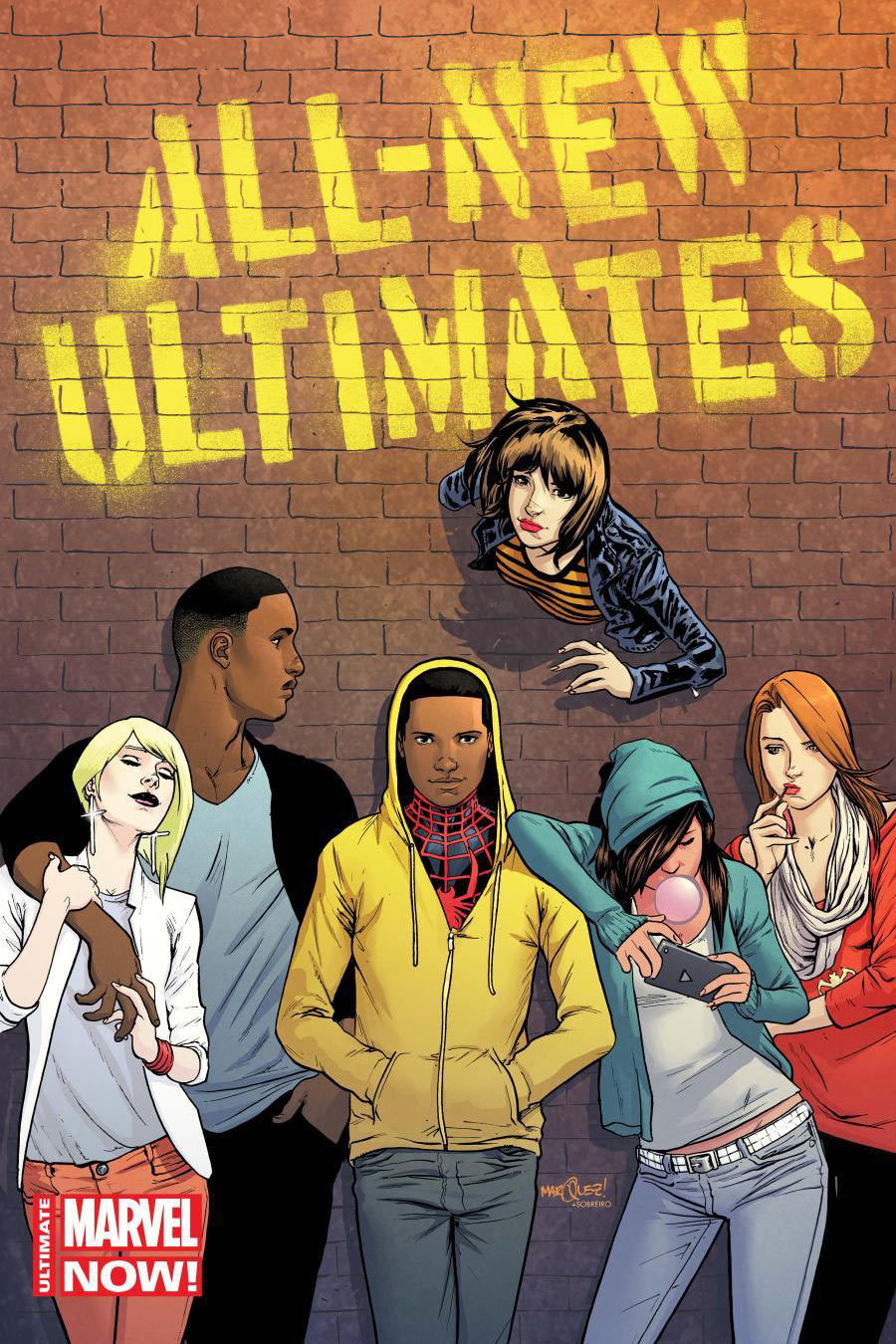 Even though their Earth is apparently in its final days as a dimensionally-displaced Galactus rampages through New York (after having eaten Jersey), Miles Morales, Kitty Pryde, Bombshell, Cloak & Dagger and Black Widow (formerly Spider-Woman) have been announced as the main players in a new series (All-New Ultimates) spinning out of the destruction of “Cataclysm.” (x)

The new Ultimate Black Widow is Spider-woman/Jessica Drew, pictured here in the red jacket. I wonder what this means for Monica Chang, and what inspires Jessica to take up a new codename with such a loaded history in the 1610 universe. (I’m not up on Cataclysm rn so maybe some of these questions have been answered.)

Ultimate Jessica Drew is quite different from her mainstream Marvel Comics counterpart: she is a clone of Peter Parker who shares his powers and many of his memories. She has worked with SHIELD and with the Ultimates.

This is the second time the Black Widow codename has changed hands in the MU. The first Black Widow, Natasha Romanov, was an evil traitor and killed by Hawkeye, which we don’t talk about much here. The current Black Widow is Monica Chang, a new character who currently serves as Director of SHIELD. Monica’s 616 counterpart was recently introduced in Avengers A.I.. And now we have Jessica Drew, who I’ll probably post more about later.

Monica: — Kama Baarakta ‘ala Ibraheem wa ‘ala Aali Ibraheem innaka Hameedun Majeed. As-salamu’alakum wa rahmatullah. Thank you for waiting, Doombot.
Doombot: Pym sent me to collect you, Monica Chang. The briefing is about to commence. Do you pray for the mission?
Monica: I pray for peace. What do you pray for?
Doombot: I am Doom. I pray to no one.
Monica: Weren’t you listening? Allahu Akbar. There are things greater than doom. Let’s go.

From Avengers A.I. #4, by Sam Humphries and André Lima Araújo.

Finally, Humphries is importing Monica Chang to the Marvel Universe proper from Ultimate Comics Ultimates, which the writer exits in May, but this version won’t the director of S.H.I.E.L.D. in the 616. Instead, she’s part of S.H.I.E.L.D.’s artificial-intelligence program “and has been anticipating this A.I. evolution for a while.”

From Ultimate Comics Ultimates #21, by Sam Humphries and Scot Eaton.

Monica Chang / Black Widow  ♠ ❛ SHIELD trained us to be experts at hurting people, and you and I are living proof that this extends into our private lives. But these moments of kindness we seem to be capable of from time to time hopefully mean we haven’t been entirely messed up by this silly profession we seem to be so good at. ❜

Yeah….. read up on her background story (and her family).  Again seems like one of those hyper sexualize dragon ladies.  I wasn’t all too pleased when I read that issue (IIRC it was the one with Ghost Rider’s origin):

” It is revealed that Monica is Asian-American and was the ex-wife of Nick Fury but the marriage fell apart after she discovered that he had been sleeping with various female members of her family (sister and cousin) and limited social circle, including her own mother.”

You know, sometimes assuming everything falls into a problematic stereotype is just as bad as that stereotype existing in and of itself.

Monica’s first few appearances aren’t the deepest or the most flattering, I’ll grant you that. The entire New Ultimates/Ultimate Avengers era is problematic for a lot of reasons, not the least of which is the way the many women characters are treated in it, but one of the best things to come out of it, in my opinion, is Monica’s character. Because from the first, even though she’s introduced as Nick’s ex, she’s a woman with her own agenda. She exists on both the New Ultimates and Ultimate Avengers, and she does so for her own sake—whether or not Nick or Carol Danvers think otherwise.

As for her being sexualized, let’s look at the facts: one of the first things we find out about her is that, yes, she was married to Nick Fury. But in her panel time, her entire existence in comics, she’s never been romantically attached to anyone, never hit on anyone, never even seemed interested in romance in the slightest. Because her history, as you’ve so kindly quoted for us, is true—Nick cheated on her with her sisters and her mother. That’s so many levels of gross I can’t even begin to explain it, but I don’t have to. It’s a fact of the story, which tells us a lot more about Nick than it does about Monica. For her part, she divorces him, raises her son on her own, and goes back to work at the organization he controls because she knows that’s what she’s good at and where she can do the most good. What about that makes her hyper-sexualized? What about that sexualizes her at all?

Sure, sometimes I wish she’d be drawn with less attention on her breasts and with a costume with a higher collar—but those are the problems I think everyone who respects women faces when they read a great deal of comics. Monica is never sexualized more than the next woman, and she’s never sexualized simply because she is Asian. In fact, she’s one of the few women of color I’ve come across who is drawn consistently with an eye to her ethnicity—her skin’s even a different tone than her Caucasian costars’.

As for the “dragon lady” comment—yeah, Monica Chang is one tough cookie. She doesn’t really stand for nonsense and a lot of her panel time involves her giving orders, talking back, or telling people to shut up. But I don’t know what’s wrong with that. She’s a hard woman who’s had a hard life, and deals with the world in a way that says she’s in charge, not anyone else. But despite that, despite the hardness of her life or her caustic personality, that’s not all she is. She’s a mother who was happy to head up a hit squad because it meant she could afford a bigger apartment for her son to grow up in. She’s a woman who was wronged by the man she loved, but still managed to work with him and trust in his plans for the greater good. She’s an Ultimate who may call her teammates stupid, but still manages to work with them and ultimately bring them together under her own leadership. But none of that really plays into the dragon lady trope.

She’s Monica Chang, and she’s the Director of SHIELD, the Black Widow, and she saved the president of the United States and the whole country. And she did it without being defined by any kind of sexist or racist trope, which is amazingly refreshing.

I realize that we walk a fine line, being fans of this medium. We want representation, we want amazing female characters who are respected, we want every ethnicity and race and creed and sexual orientation to be given its due. I want these things, too. And I want them badly. Monica Chang, she gives me a lot of them. She’s an unforgiving, unapologetic, amazing woman. She’s a mother and an secret agent. And if you think you have her down pat based on one paragraph from a wiki article—well, you’re just wrong.

Really, though, pick up appearances beyond Ultimate Avengers if you really want to see what she’s made of. Because she’s amazing, and more people should appreciate her. 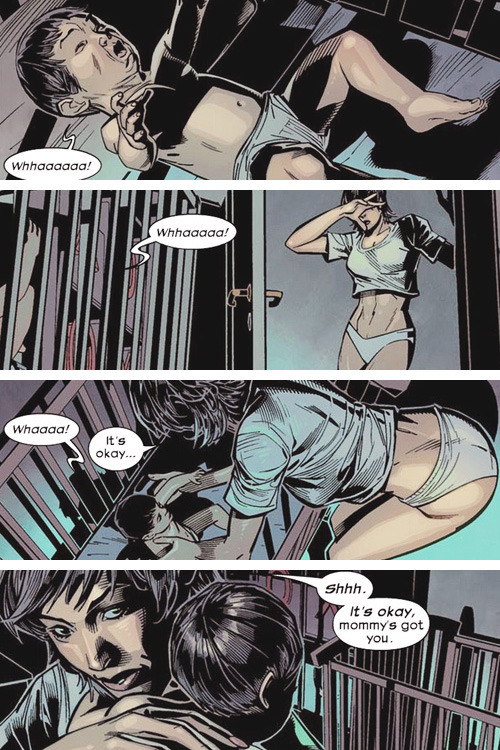 From Ultimate Comics Ultimates #6, by Jonathan Hickman and Brandon Peterson.