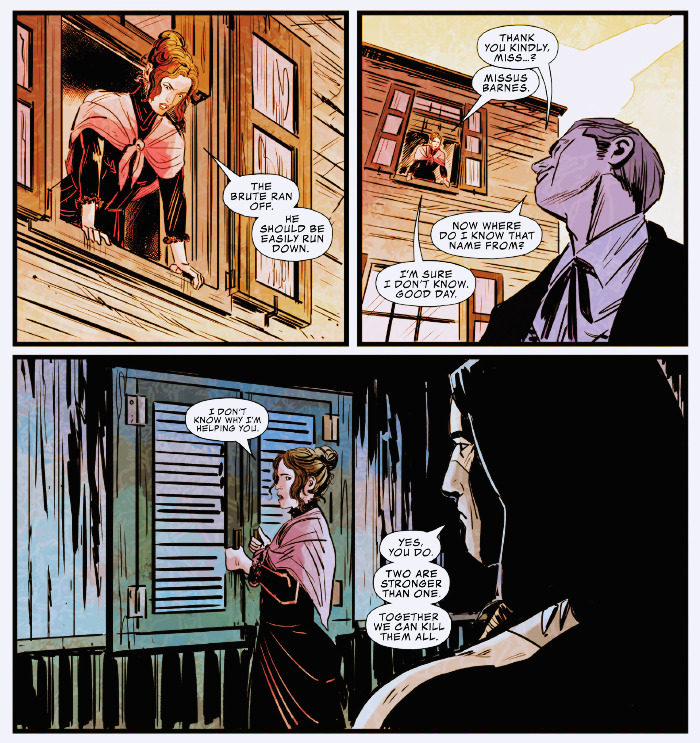 Natasha: The brute ran off. He should be easily run down.
Bullseye: Thank you kindly, Miss…?
Natasha: Missus Barnes.
Bullseye: Now where do I know that name from?
Natasha: I’m sure I don’t know. Good day.
Natasha: I don’t know why I’m helping you.
Red Wolf: Yes, you do. Two are stronger than one. Together we can kill them all.

1872 is a clever callback to Natasha’s original, super-retro origin story: the one where she fought to take her husband’s place, the one where the KGB lied about his death. Then, as here, the ghost of him kept her loyal to a corrupt regime. And then, when she learned the truth, they couldn’t stop her from doing the right thing.

The series really needs to let Red Wolf be the protagonist moving forward to be actually great, but if you need a Natasha fix during Secret Wars, this might be worth picking up.

In this interview, Dan Abnett discusses his projects with Marvel, including Guardians 3000 and the upcoming Secret Wars tie-in, Korvac Saga. The original Korvac Saga was a late-70s Avengers plotline, and since they’re turning Civil War into its own universe I guess it makes sense to make it a universe too.

But, in fact, Battleworld is this extraordinary alchemical place where things have been blended together that shouldn’t necessarily fit together. Yet they seem to work really, really well. There’s this extraordinary blend of technologies. High tech, low tech, and all sorts of primitive elements as well. Societal structures might seem very medieval, but the language is very modern. The buildings might be modern, but some of the technologies might be low tech. So The Forest Hills, as Korvac’s kingdom is called, is both recognizable yet full of oddness.

In this story, the Avengers are the household guard of the charismatic Simon Williams, in a quasi-medieval mashup, while the Guardians are the household guard of the neighboring house of Korvac. “They’re sort of friends and rivals in sort of the same way neighboring lords in a feudal society would be. When they get together, there’s a big feast and all of their warriors drink together, but if war arose, they would be foes.”

The Avengers roster at the time of the Korvac Saga was just gigantic, and Abnett explains how he picked some of the characters who will appear in this retelling:

I looked to the roster there, and the obvious thing to do was pick all the key Avengers like Captain America, Iron Man and Thor. It occurred to me, though, that we’re going to see those characters in other places during “Secret Wars,” and to have repetitions or alternate versions was unnecessary. It was really nice to take some of the beloved characters who haven’t been in the forefront of the Avengers for a while, or are particularly redolent of the time period, and to use those to make those the team.

I went down the list of characters who were present during the original “Korvac Saga” and made my selection. So we have Hercules, who’s fantastic. We have Black Widow. We have Black Panther. We have Jocasta. We have the Vision. We have Yellowjacket. We also have Moondragon. She was part of the original “Saga,” but there’s Guardians connectivity there as well, which I thought was a nice touch.

So, if you like 70s Avengers or you’re interested collecting all the Black Widows Battleworld has to offer, Korvac Saga is something to watch.

A Marvel executive provides a list of titles ending because of Secret Wars, “with the caveat that some may return in the future in some form or another.” The good news is, Black Widow is not on this list. The worried news is that a lot of titles I’m reading and enjoying are, including Angela: Asgard’s Assassin, Captain Marvel and Storm.

I’m sure that many of these titles will stick around. I don’t think Avengers is cancelled permanently, and it makes sense for this crossover to be the end of Hickman’s run on the title, leading into another relaunch. That is just the state of the title, these days. But I’m not sure Secret Avengers is coming back, with a SHIELD title to fill its niche. And the inclusion of books like Elektra and All New Ghost Rider on this list feels dishonest, since those titles have been straight-up cancelled, and aren’t meeting their natural end due to Secret Wars.

Everything Ends: In Search of a New ‘Reboot’ Pun

Dateline: this week. Marvel’s big announcement was the end of the Marvel Universe as we know it. Secret Wars, the latest summer status-quo changing Marvel Crossover Event. Crossover this time means the Ultimate Universe and regular old vanilla Marvel are crashing into each other, somehow resulting in a theme park map instead of a coherent continuity. As before and as ever, nothing will ever be the same.

Cue the tapping of a thousand tumblr posts, ranting in unison. Marvel won’t call it a reboot, but they won’t not call it a reboot, wink wink awkward twitch. But this really sounds like a way to end the Ultimate line and keep whatever’s there that’s worth saving. (Miles Morales, I mean Miles Morales.) I don’t think stories will be selectively wiped from continuity arc by arc or that the 616 universe will emerge drastically changed. I do think they want to keep the possibility open to get you to buy this Big Event.

What they are trying to deny is that this is all about making MCU the one canon to rule them all. And I believe them: an overcomplicated patchwork quilt of all realties called “Battleworld” is basically the most comics thing to ever comics. And Marvel hasn’t needed big crossover events to bring elements of the films into the comics. They just give Iron Man an arc reactor or pretend Coulson has always been standing there.

What does this mean for Natasha? Like I said, I’m thinking probably nothing. She hasn’t been featured in any of the Secret Wars promo images so far. But there’s a story for her in this mess: Natasha is a bad guy in 1602, in Mangaverse, in Ultimates. I find her forever evil AU status frustrating, but it could be a cool thing to invoke, here. How does Natasha deal with the revelation that in every universe but her own, she wound up dead and a terrorist?

A stronger question is: what does Secret Wars mean for Black Widow. Will the book be dragged into a tie-in? Cancelled and relaunched in phase 3.1 of Marvel Now? Black Widow is solicited through issue #17, and #18 would be a natural closing point. Alonso says creative teams have been prepared for this, whatever this turns out to be. I don’t know: I doubt everything is going to relaunch because so many Marvel books are just beginning, but then, Marvel lately has been built around issue #1s. What I do know is that one of the strong points of this Black Widow volume is that it doesn’t seem like a place where universes bang together, and that I’ll be sad if the current apocalypse derails it right as it’s gaining momentum.

And then: what does this mean for Ultimate Black Widow, Jessica Drew? Like I said, I think this whole big blow up is a way for Marvel to end Ultimates but keep the pieces they like. But I’m not convinced Jessica is one of those pieces. They’ve killed the previous two Ultimate Black Widows. I hope they won’t make it three.