I’d be way, way more interested in the film if it was #TeamSharon vs #TeamNat and called Sharon Carter: Civil War. Bonus points for explicitly building off a friendship they shared at SHIELD that we never got to see, and for incorporating a past Peggy vs Dottie thing in the background in an unexpected way. Sharon and Natasha must have such different ideas about legacy, the people they have to live up to, and the ones they have to leave behind. 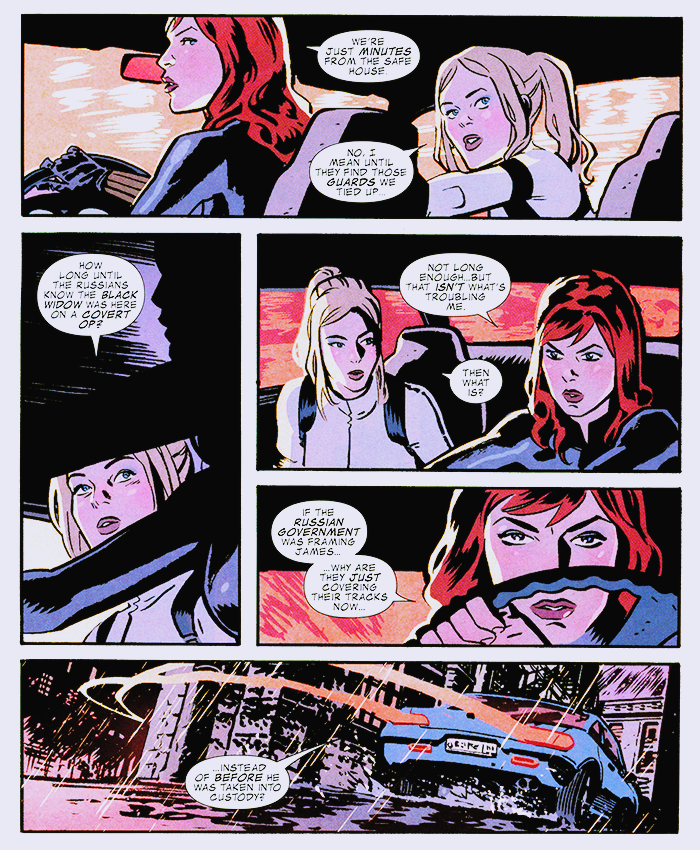 Sharon: How long do we have?
Natasha: We’re just minutes from the safe house.
Sharon: No, I mean until they find those guards we tied up. How long until the Russians know the Black Widow was here on a covert op?
Natasha: Not long enough… but that isn’t what’s troubling me.
Sharon: Then what is?
Natasha: If the Russian government was framing James… why are they just covering their tracks now… instead of before he was taken into custody?

There’s a persistant myth in fandom that giving one female character screentime takes away from all the rest. It doesn’t actually matter if they have vastly different plotlines or personalities, they still take up Lady Points, and Lady Points are strictly rationed. Inevitably, this sort of thinking drowns away all nuance and small strengths, and makes “female” the most important trait a female character can occupy. Like actors at the Oscars, women characters are placed in a separate category from their male counterparts, even though the roles they occupy do not need to be any different.

The thing is, though, even two female characters with similar personality traits and skillsets can share space without using up all the Lady Points. Because Lady Points aren’t real.

From Captain America #618, by Ed Brubaker and Chris Samnee. 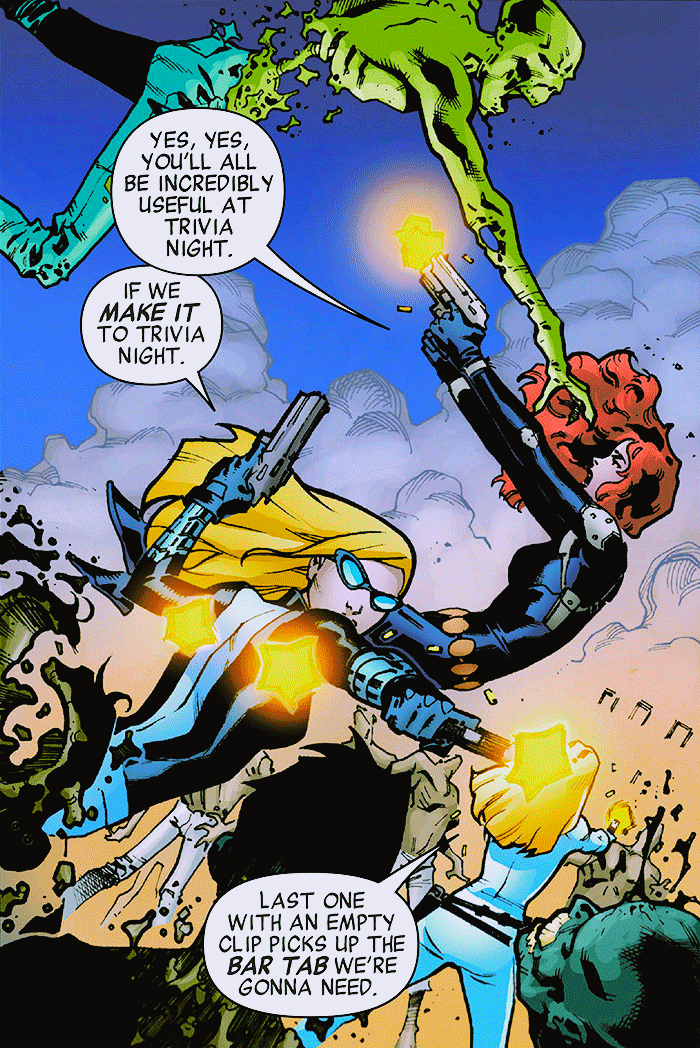 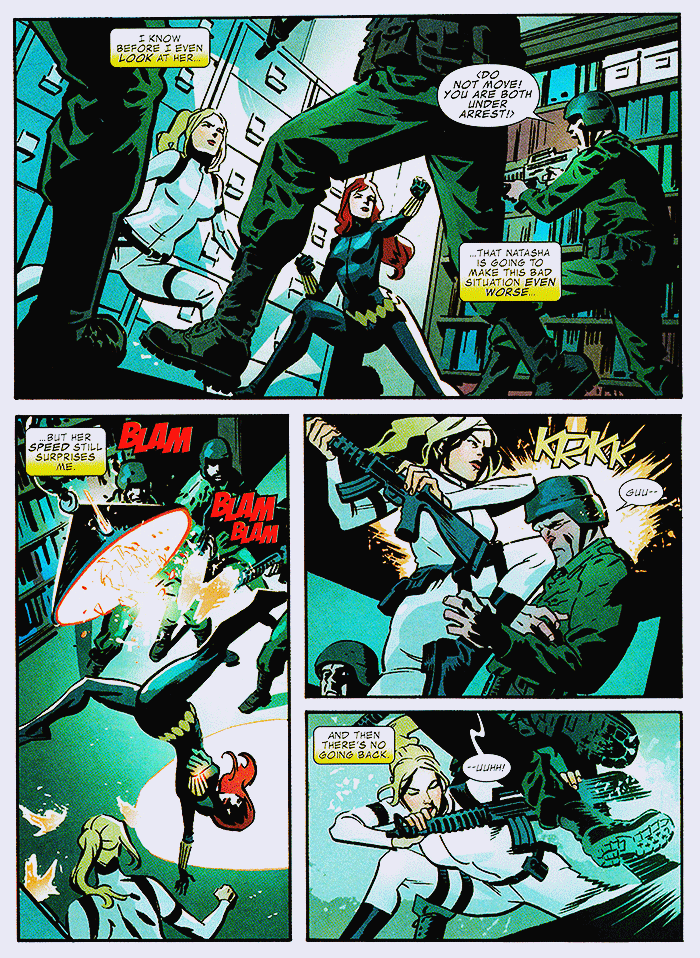 Sharon: I know before I even look at her that Natasha is going to make this bad situation even worse… but her speed still surprises me. And then there’s no going back.

From Captain America #618 by Ed Brubaker and Chris Samnee.

I’m a really bad person to ask about the Hulk corner of the Marvel universe, but I do love me some Sharon Carter. (If followers want to leave Betty recs, though, I’d appreciate it.)

There are a few recentish one-shots and continuity light stories that you can jump into with minimal effort for a quick Sharon fix:

Now, if you want to read a longer, more involved character arc, the quintessential Sharon, imo, is Mark Waid’s. Sharon was fridged back in the 1970s, but Waid reveals that her death was faked as part of a SHIELD mission. Unfortunately for Sharon, that mission did not go well, and she was left behind in enemy territory for years. When she returns to the book, she is dealing with a wicked case of PTSD and disillusionment with the ideals that led her to join SHIELD in the first place. The Waid Captain America run was somewhat infamously interrupted by a terrible Liefeld reboot, you can skip that.

Then there’s the Brubaker run, which features Sharon as a major player but also puts her through some awful paces. This series has some good moments for Sharon (I think the Civil War spotlight issue, #22, is pretty strong if you can squint around the brainwashing) but also some pretty terrible lows. It is, however, the major Sharon arc of the past 10 years or so. You can skip the worst of the grimdark stuff by reading from Reborn forward. (Reborn has a lot of cool Sharon moments, even if it does involve time bullets.)

I think after this you should be pretty well set to read any Sharon appearances that catch your eye, like the old Silver Age stuff, whatever it is Remender did, the first fifteen issues of Secret Avengers, &c &c.  I hope this is helpful!

They share some panel time in the Ellis runs as well as other appearances of the Secret Avengers team, including Onslaught Unleashed, and I think it’s fair to assume they encountered each other at least casually while working at SHIELD. (Brubaker’s Captain America stuff doesn’t introduce them as total strangers, and Natasha mentions holding Sharon in high esteem as an agent.)

The key Sharon/Natasha team-up is Captain America and the Secret Avengers #1, a one-shot by Kelly Sue DeConnick that you may or may not have read. It gives them a fun dynamic, letting Sharon play the cynic role that Natasha usually plays in other Avengers stories.

Natasha: Sharon, you have to relax.
Sharon: I am relaxed, Natasha.
Natasha: No, you’re not.
Sharon: I’m relaxed as I’m going to be walking into a trap.
Natasha: It’s not a trap.
Sharon: It is a trap. When someone sends you a letter telling you they’re going to do violence and then tells you the time and place— I promise you— it’s a trap.

I wouldn’t say that they’re close in comic book canon, because neither of them are easy to get close to, but they’ve worked together enough to have a certain camaraderie. In the MCU, their relationship, if any, is entirely off screen. I don’t blame fans for filling in the blanks— I think it’s indicative of a demand for positive relationships between women that canon isn’t always great at meeting. 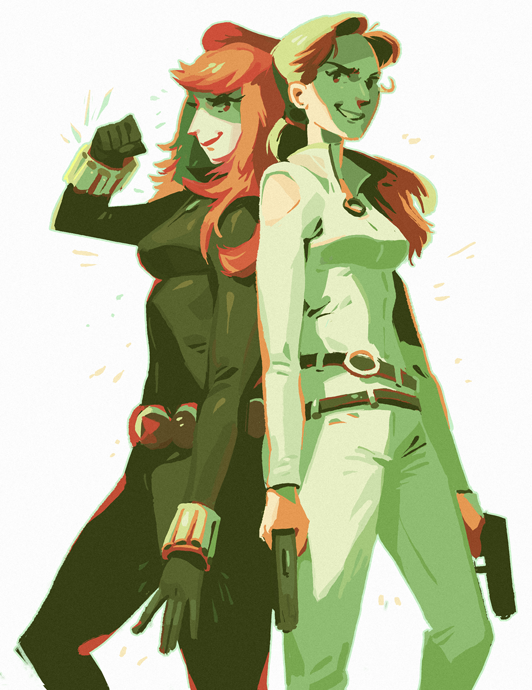 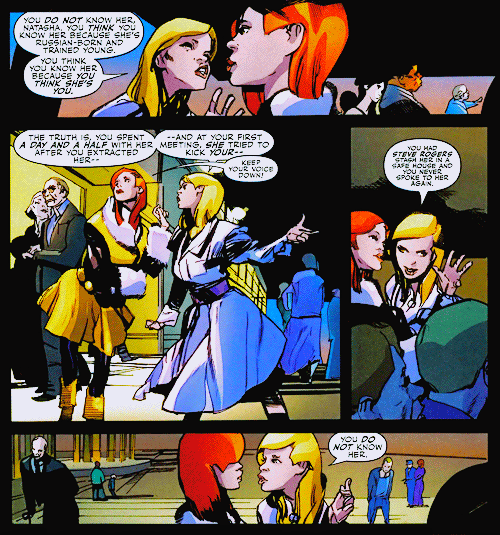 Sharon: You do not know her, Natasha. You think you know her because she’s Russian-born and trained young. You think you know her because you think she’s you. The truth is, you spent a day and a half with her after you extracted her— and at your first meeting, she tried to kick your—
Natasha: Keep your voice down!
Sharon: You had Steve Rogers stash her in a safe house and you never spoke to her again. You do not know her.

One of the things I love of about Sharon and Natasha’s brief interaction is how Sharon’s pragmatism shines through. Most of Natasha’s friends are superheroes, and through their eyes she comes off cold, calculating, harsh. But to other SHIELD agents, the ones without fancy Avengers clearance and mysterious backstories, Natasha must seem sentimental and showy. She has the skill to run into a room full of armed men and beat them all with fists and high-kicking, and they do not. She gets away with things, she can bend the rules, she can make her own missions. They are numbers— Agent 15, Agent 44. She is the Black Widow.

Sharon is not a superhero, she is a spy. She deals with the the threats of a comic book world without powers and without any of the plot protections that come with Avengers status. She fights within a narrative that considers her expendable. And that has made her tough and “unlikable” and mean, but she keeps fighting, anyway, because Sharon Carter is the bravest motherfucker on Earth 616.

I am glad that this story let Natasha be right about Tatiana. But I am glad it let Sharon be right, too.

From Captain America and the Secret Avengers #1 by Kelly Sue DeConnick and Greg Tocchini. 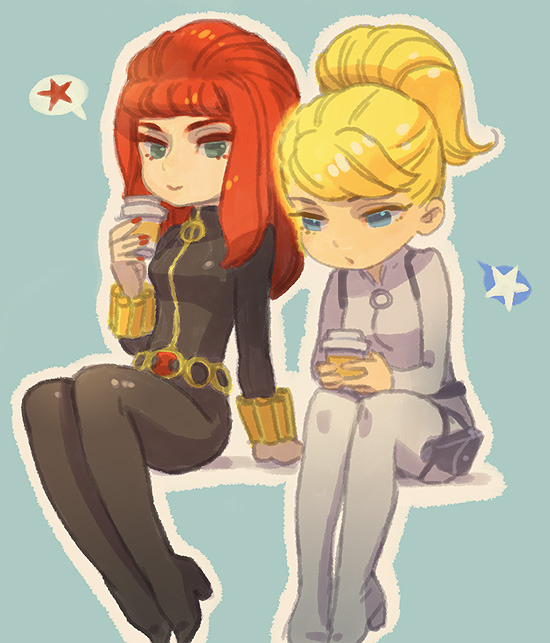