I’m not linking to this @entertainmentweekly article because of the quote they share (I’ve already reblogged it, or something like it), but for the context included in the article:

Black Widow is a popular character played by a popular actress in a popular series of films that prides itself for establishing the cinematic universe model of development. Giving the character her own movie should be a no-brainer, right? Instead, it’s newsworthy when anyone from Marvel Studios acknowledges the obviousness.

While the compliments are undoubtedly appreciated by fans and bode well for Natasha’s role in Civil War, they don’t move the ball much in terms of getting them closer to a Black Widow movie. With word coming that the future Avengers films will focus on newer characters, a solo film is looking less and less likely. And even if the film got the greenlight today, it wouldn’t hit theaters until late 2019 at the earliest.

The truth is, none of the encouraging quotes we all share are indications we’re actually getting a BW movie, and I think we all know that. But these quotes are a way to keep the conversation going, and loudly, such that Marvel knows it’s there. Their answer to any question is saying “be vocal,” and it’s easy to get discouraged when we’ve been vocal and nothing’s happened- but the second we stop being vocal, it becomes the excuse for why nothing’s happening: fans didn’t care anymore.

And no, it’s not our responsibility, exactly, but if we want to advocate for something we need to focus on what gets positive attention. Which, thus far, has largely been asking questions to anyone at conventions who stays still long enough for us to be asked.

So yeah, I’ll continue to reblog these quotes, even though they aren’t any indication we’re actually getting a Black Widow movie. What they are instead is an indication that we’re not shutting up, which is the most that we as fans can do.

This may be a perfect time to start campaigning again.

And perhaps most tantalizingly of all, Marvel has at least considered the idea of affording Hawkeye or Black Widow their own Netflix projects, ones that might meld both TV and movie characters for a movie or event series, though this especially is seen as a pipe dream.

And on a personal level, my daughter is six years old now. She just lost her two front teeth, just like Scott Lang’s daughter Cassie in Ant-Man, and is beginning to learn what Daddy does and about the different types of heroes. She has red hair and is constantly pointing at Black Widow and wanting to learn more about that.

Kevin Feige, man in charge of Marvel Studios, which has not yet announced a Black Widow movie 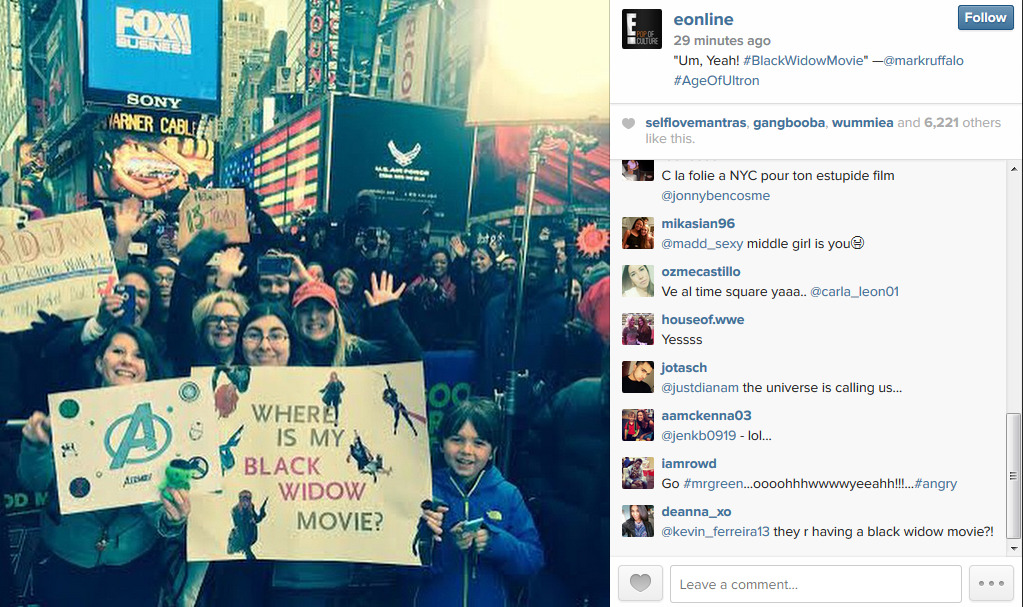 NBD. That’s me and allofthefeelings in markruffalo‘s photograph. (I am the one with Itty Bitty Hulk.) Amy’s awesome sign. We tried to get it on camera as much as possible.

Following its leak online yesterday, Marvel Studios officially released its trailer for the Avenger’s sequel, “Age of Ultron”. You can watch the entire trailer here.

And in that trailer there is this moment above which is without question one of the best action moments.

It is Scarlett Johansson as Black Widow dropping out of a plane while riding a motorcycle.

Can anyone argue this is not awesome?

Every male lead character save Hawkeye and Nick Fury has had a standalone movie. Ironman, Thor, Cap and the Hulk. Antman will soon have his own film. There is also rumors swirling about a Dr. Strange movie.

But Black Widow, the character that is about to appear in her fourth Marvel movie, does not have a film announced.

With Lucy this past year, Johansson showed she can take mediocre material and turn it into a worldwide hit grossing over $415M globally. That’s for an unlicensed character in a film with bad to middling reviews. By comparison the first Captain American film with Chris Evans had a worldwidel box office of $370M globally.

When asked why there is no Black Widow film, Marvel Studios president Kevin Feige has that he “hopes” to have a movie “sooner than later”.

Marvel Studios Executive Vice President Vicki Alonson was recently asked about the lack of female led films by Marvel she said “if it were up to me, it would be today”

A few weeks ago, DC Comics announced that they would make a Wonder Woman film in 2017 with Gal Gadot.

Why with the success of Lucy, Black Widow given plenty of life out of the four other films she’s appeared in would Marvel Studios not greenlight this film?

I’m not sure I entirely can put the blame on Feige. He ultimately answers to Ike Perlmutter but you have to wonder too why he is choosing to leave the potential gross of a Black Widow movie on the table.

It’s not the visibility of the character.

It’s not like they don’t have an actor proven at the box office.

It’s not like there aren’t any good stories to tell.

There’s only one major difference between Black Widow and the other characters Marvel Studios is giving their own movies to – she’s a woman.

And that’s a problem.

Why isn’t a Black Widow movie a priority for Marvel? That seems to be the question of the year. Scarlett Johansson’s popular assassin character was a huge reason why Captain America: The Winter Soldier was a massive box-office success and the actress herself has expressed an eagerness to see the character have her own movie. It’s downright laughable that between the prolific Marvel, DC, X-Men and Spider-Man franchises not a single concrete announcement has been made about plans to produce a film with a female lead. (Gal Gadot’s Wonder Woman is closest, but it’s still a matter of when.) So what’s the hold up? As far as Marvel Studios president Kevin Feige is concerned, “It comes down to timing.” And that, I’m afraid, doesn’t sound exactly right… isn’t “timing” also just another way of saying “this isn’t our priority?”

As for Feige’s question of whether they should put an existing franchise on hold to make room for a female-led one, why not? Do we really need the confirmed Captain America 3 and Thor 3 before we even get Black Widow 1? Is the logic there that both Cap and Thor have established box-office clout? If having a known quantity in the leading role is the concern, then why not Black Widow 1 before the comparatively esoteric new kids on the block Doctor Strange and Ant-Man? There’s no way to logic around the fact that Marvel is dragging its feet on this matter.