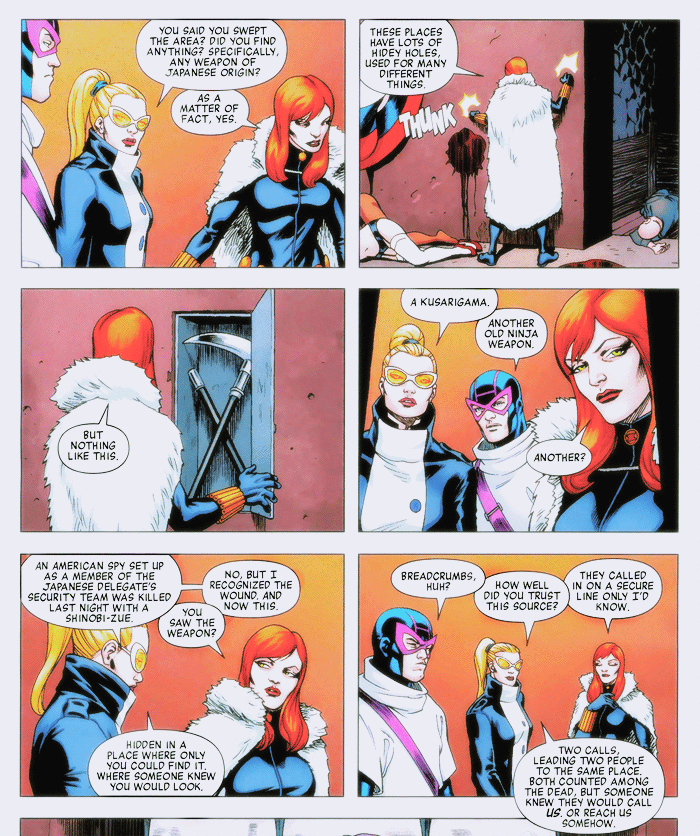 Bobbi: You said you swept the area? Did you find anything?
Specifically, any weapon of Japanese origin?

Natasha: As a matter of fact, yes. These places have lots of hidey holes, used for many different things. But nothing like this.

Bobbi: An American spy set up as a member of the Japanes edlegates security team was killed last night with a shinobi-zue.

Natasha: You saw the weapon?

Bobbi: No, but I recognized the wound. And now this. Hidden in a place where only you would find it. Someone knew you would look.

Bobbi: How well did you trust this source?

Natasha: They called in on a secure line only I would know.

Bobbi: Two calls, leading two people to the same place. Both counted among the dead, but someone knew they would call us. Or reach us somehow.

Clint contributes approximately nothing to this conversation. Bobbi and Natasha basically talk over him, since they are good at spying and he is not.

From Widowmaker #1, by Jim McCann and David López.

Bobbi: You came here in that thing?
Natasha: You two and movies and musicals. Made for each other.

I’m actually sort of surprised Natasha picked out the references to Star Wars and Les Misérables. Not because they’re so obscure omg, but Natasha grew up in 1940s Soviet Russia in a completely different pop culture context. And also because she clearly doesn’t appreciate the nerdery.

From Widowmaker #3, by Jim McCann and David Lopez. 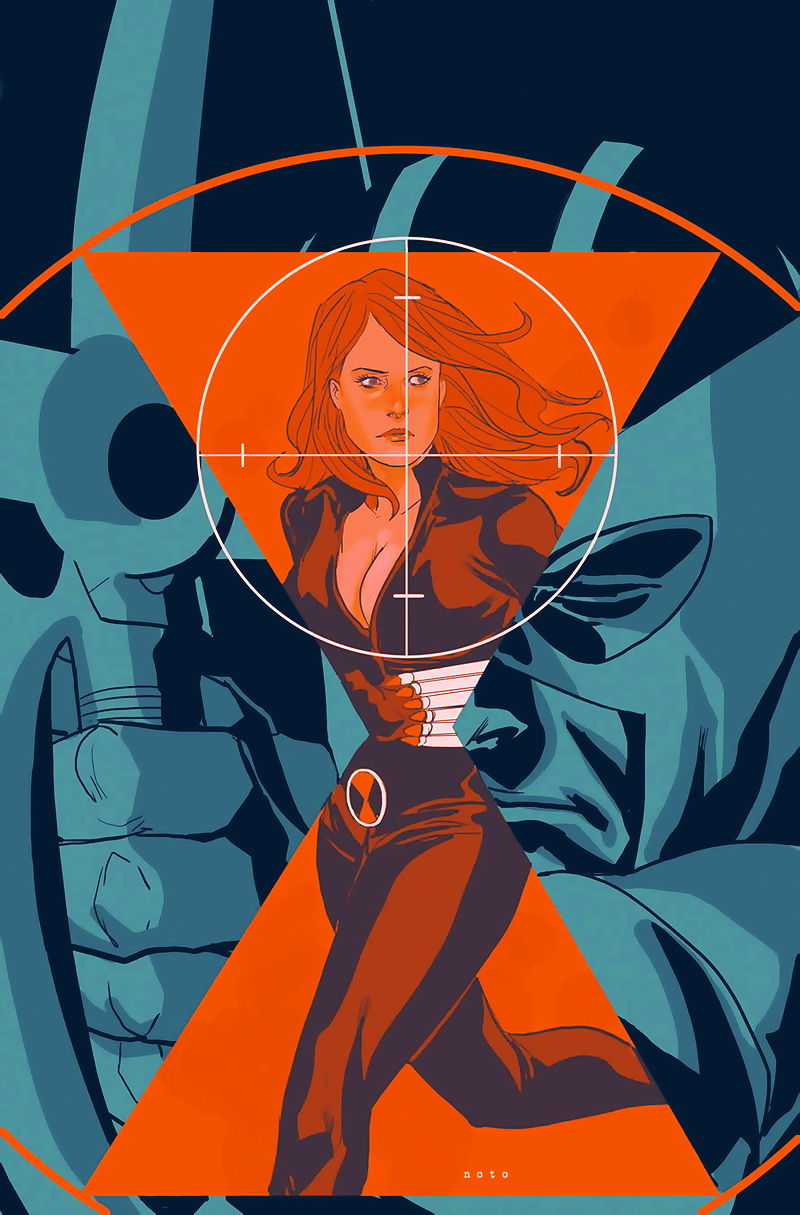 Cover to Widowmaker #4, by Phil Noto.

Natasha: Well, they employed places like these back in the 1800s to use the oldest profession in the world to get pretty damning secrets out of rather high-up officials.
Clint: Blackmail. Pillowtalk.
Natasha: Exactly.
Clint: They’re not exactly going to get anything out of me, so the point of going in there is…
Natasha: Recon. Blackmail’s too easy these days. That poor fool probably had no idea what else goes on in there. There’s another reason they re-opened these places. Pretty sure I know what’s in there, and who.
Clint: Great! You go in!
Natasha: I don’t have the same assets as you.

Still not sure what to make of this.

Clint: Y’know, when you sent me in here, you could’ve warned me that these aren’t just “lovely ladies”… they’re in the freaking school for gifted ninja girls! Can I have my bow now?
Natasha: Obscure Les Miz song reference? Really? If I hadn’t already dated you…
Clint: Hey! Easy, or you’ll make these girls jealous. They’re already angry enou-ufff!
Natasha: I knew I should’ve gone with Fortune.

I realized I haven’t posted much with Clint, so. Since when was Natasha fluent in American showtunes? Has she been pop-culture savvy this whole time and keeping it a secret? 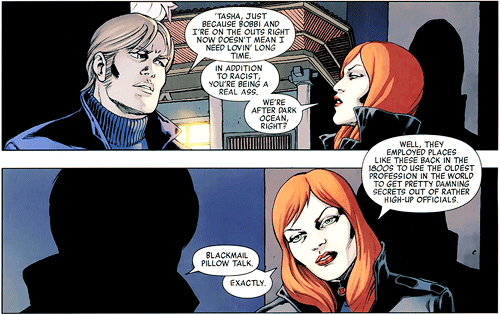 Clint: ‘Tasha, just because Bobbi and I’re on the outs right now doesn’t mean I need lovin’ long time.
Natasha: In addition to racist, you’re being a real ass.

Widowmaker’s schoolgirl-ninja-brothel was pretty much every unfortunate cliche of Marvel Japan combined, but I did appreciate this call-out.

From Widowmaker #3, by Jim McCann and David Lopez. 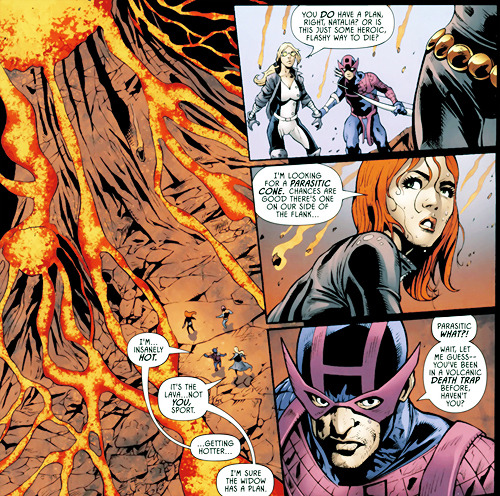 Clint: I’m… insanely hot.
Bobbi: It’s the lava, not you, sport.
Clint: …getting hotter…
Bobbi: I’m sure the Widow has a plan. You do have a plan, right Natalia? Or is this just some heroic, flashy way to die?
Natasha: I’m looking for a parasitic cone. Chances are good there’s one on our side of the flank.
Clint: Parasitic what?! Wait, let me guess— you’ve been in a volcanic death trap before, haven’t you.
Natasha: Remind me to tell you the real story behind the Mt. St. Helen’s eruption someday.

From Widowmaker #4, by Duane Swierczynski and Manuel Garcia. 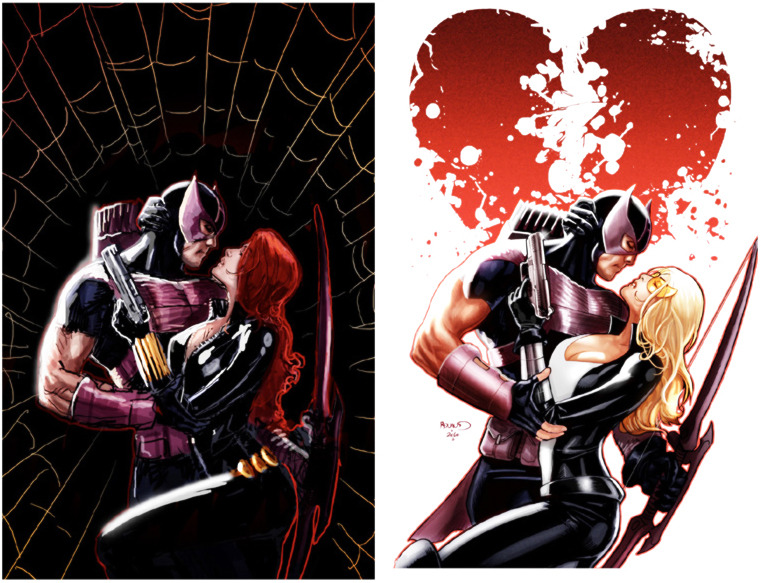 Paul Renaud’s rejected cover concept for Widowmaker #1 (they wanted a double cover) eventually became his cover for Hawkeye and Mockingbird #6.

From Widowmaker #4 by Duane Swierczynski and Manuel Garcia.